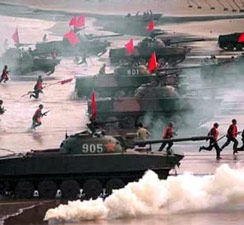 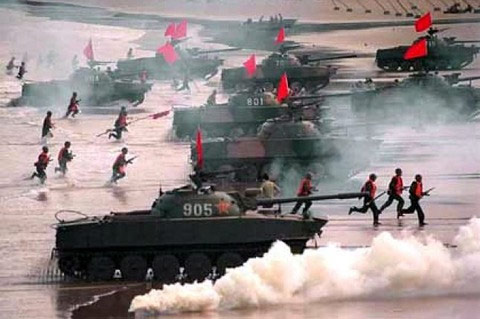 When we read the papers or turn on the television (for those of us who have television), hardly a day or two passes by without the mention of new (or ongoing) actions by the Chinese government in a military capacity.  Within the past year alone, China has extended her reach steadily beyond her own territorial waters and nearby sea-lanes.  She has participated in numerous exercises, some of them jointly with foreign nations.  Anyone can clearly witness her aggressive, outwardly expanding policies regarding territory and flexing her muscle.

The most recent maneuver comes on the heels of the Russian actions in Syria.  China (if you recall) just sent a carrier through the Suez Canal to support Russia’s actions, “against ISIL/ISIS”…whatever the boogeyman/Emmanuel Goldstein is currently labeled.  In reality, China is forming a partnership in a power play that may hold dire ramifications for Western society.  These ramifications are likely to be economic as well as military.

Joint exercises with Russia began on August 21, 2015, labeled as the “Sea Cooperation: 2015 (II) exercise.  Russia was in charge of the operation that was held in the Sea of Japan just off the coast of Vladivostok, Russia.  The Chinese sent five aircraft, six helicopters, and approximately 500 soldiers to participate in the exercises.  The exercises lasted until August 28 and were the longest cooperative military exercises between China and Russia to date.  The basic objective was to foster coordination and partnership in landing operations and seagoing/naval defenses.

In this exercise, five Chinese fighter planes were permitted to cross the Russian border for the first time.  Truly this represents a tremendous change between two countries that were in an undeclared state of war for more than half a century.  The frightening thing is this silent objective lodged within the exercises:

Landing operations.  If the Chinese are not preparing for an invasion of the West Coast of the United States as (or during the) kickoff to WWIII-hostilities, then every military analyst and observer must be wrong.  Superficially it can be to prepare China for the Senkaku Island campaign, which is definitely in the works versus Japan.  The scale and complexity of the maneuvers, however, lends to reason that a much bigger target must be in China’s sights.  We are already aware of Russia’s aggressive stance and unwillingness to back down even with the potential of a conflict with NATO and other allied Western Powers.

These exercises are much more than merely “force projection,” a term basically to connotate that one side is brandishing its claws and baring its fangs to the other side in a show of capabilities.  These exercises are to develop key command and control networks with Chinese allies for both potential small-scale (Senkaku, Syria, for example) joint operations, as well as long-term plans to eventually invade and conquer a larger nation, such as the United States.

The operations between China and Russia were the first of their kind with a concentrated focus on both the Sea of Japan and the Mediterranean, focusing on readiness to protect naval straits in close proximity to and far away from the borders of the two countries.  The Chinese just “plopped down” a carrier outside of Syria in which its fighter aircraft will be supporting Russia in the “great war against ISIL/ISIS” that apparently has commenced.

The Chinese have been developing land-to-ship and ship-to-ship cruise missiles that can effectively outrun all of the U.S. naval defense systems’ capabilities.  The missile is a “carrier-destroyer” that can render an entire naval fleet or carrier group inoperable with a small nuclear warhead (1/4 megaton or even smaller).  The Chinese have been upgrading their submarine fleet’s capabilities in terms of stealth technology, weapons technology, weapons capacity, and range.

The Chinese (for years, now) have been escalating their cyber attacks, their data theft of military and defense information (most of it classified), and their “probes” of various facets of critical U.S. infrastructure.  To see how this came about, an excellent read is “The Year of the Rat,” characterizing the years of the Clinton administration and how its namesake and cronies enabled the selling of classified defense secrets to Chinese operatives.

The PRC has been modernizing and expanding all of their military capabilities and their presence in all parts of the world.  They have also partnered with Russia in providing both technological and military assistance to Iran, as well as strengthening that country’s position in dumping the Petrodollar as the unit of exchange.  It is just a matter of time before Iran permits both Russia and China to keep large troop presences and bases inside of her borders, a deterrent to U.S. attack as well as a first-response capability when that eventuality does indeed occur.

Another key thing to watch is the slumping Chinese economy coupled with the enormous debt owed to China by the U.S.  Does anyone really believe that when and if the Chinese economy is on the brink of collapse/collapses that they’re going to extend to the U.S. one of those hokey “debt forgiveness” ads to write off the money owed by America?  Look at what has been happening in the northwestern states, such as Idaho and Montana.  The governors and the progressive (that’s communist) state legislatures have been turning over huge amounts of land and natural resources to the Chinese.

The federal and state governments of the U.S. have been using taxpayer funds to allocate the natural resources and land belonging to U.S. citizens as a payment to the Chinese.

The Chinese are ever growing, ever expanding, and constantly striving to overtake the U.S. in all areas.  As we watch daily, we can see their slow but steady forward progress in successful undertakings toward their goals.  At this rate, it will not be long until those goals are realized.  The only question is when will they take military action against us?  Will it be with economic collapse or will it be swift and sudden in the form of ICBM’s?  One thing is for certain: when WWIII kicks off, the Chinese will play a major role, and not on the side of the United States.

How To Prepare For Any Disaster