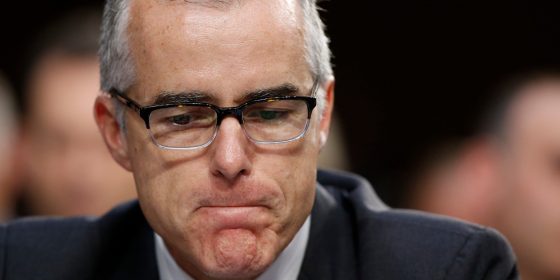 A new book on the media’s relationship with the Trump White House has revealed a FBI operation to specifically set up a senior member of the Trump administration in a move that eventually led to the original claims of obstruction of justice against the president.

According to the book, “Media Madness,” by Howard Kurtz, then deputy FBI Director Andrew McCabe called White House chief of staff Reince Priebus shortly after the release of a fake news report in the New York Times to ask to speak to him privately, telling him that “everything” in the article was “bullsh*t” and not to be believed.

McCabe claimed to want Priebus to know the FBI’s perspective that this story was not true. Priebus pointed to the televisions that were going non-stop on the story. He asked if the FBI could say publicly what he had just told him. McCabe said he’d have to check, according to the book.

There seems to be a disparity between what FBI officials tell reporters under the cloak of anonymity and what they admit under oath or to those who are more knowledgeable of the matters at hand. Opponents of President Trump, be they the media, Democratic activists, or Never Trump Republicans, are moving on from Russia conspiracies to claims of obstruction of justice.

The McCabe initiated conversation with the White House was then quickly leaked to CNN, which gave cover for the entire mainstream media to spread disinformation regarding President Trump and his supposed obstruction of justice. (That literally didn’t happen)

An excerpt from Kurtz’s book makes clear that Priebus himself felt like he had been set up, not only by Andrew McCabe but also by James Comey himself.

Now, a week later, CNN was airing a breaking news story naming Priebus. According to ‘multiple U.S. officials,’ the network said, ‘the FBI rejected a White House request to publicly knock down media reports about communications between Donald Trump’s associates and Russians known to U.S. intelligence.’

Priebus was stunned by the implication that he was pressuring law enforcement. Had he been set up? Why was the FBI leaking this information when one of its top officials had initiated the conversation?

That’s right, the man who just stepped down from the FBI, the same man who the mainstream media has claimed has done nothing wrong, was the person who set up a meeting with the White House that was designed to then make it look as if Trump was pressuring the bureau regarding the Russian probe itself.

Or, in other words, a direct SET UP on the democratically elected President of the United States.

“Partisan operatives in or close to the FBI communicated snippets of information with reporters who didn’t demand proof or substantiation, then FBI officials denied to White House officials who knew the facts that they were seeding that information, then officials suggested that White House operatives were obstructing justice by asking for the truth to out. At a time when people are looking for patterns, this is a pattern of improper behavior that deserves focus from the media,” Hemingway concluded.

Make no mistake, this is hardcore, deep state level corruption and possible treason, aided DIRECTLY by the likes of CNN and the New York Times.