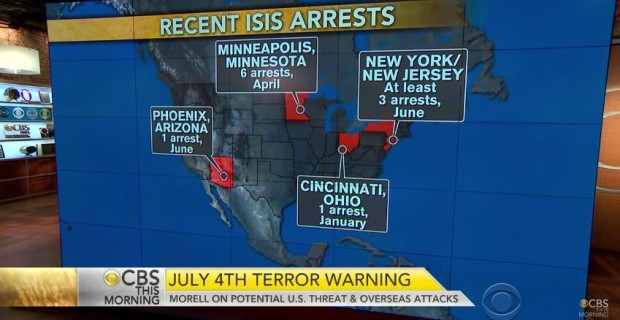 Following warnings by the federal government that terrorists may be planning to attack Independence Day events, FBI agents are reportedly telling friends and family members to avoid major July 4 celebrations.

Gateway Pundit’s Jim Hoft cites an “inside source” who told him that, “FBI agents are telling their friends and family members to avoid “official celebrations.”

Hoft also claims that the FBI has canceled vacation for all its agents for the duration of the weekend.

Earlier this week, the Department of Homeland Security and the FBI issued alerts to local law enforcement and urged Americans to “remain vigilant” for this weekend’s July 4 events.

Former CIA Deputy Director Michael Morell also said Monday that he “wouldn’t be surprised” if there’s a terrorist attack during the 4th of July weekend.

“This one really resonates with me for two reasons,” Morell said. “One is there’s been about 50 people in the last 12 months who have been arrested in the United States for being radicalized by ISIS, wanting to go fight there or wanting to conduct an attack here, so there’s a lot of people out there who are seeing themselves as aligned with ISIS, number one.”

“Number two, you have this ISIS call to arms during Ramadan,” Morell said. “We are right in the middle of Ramadan, call to arms, conduct attacks against our enemies, so I’m worried about this one.”

Fox News also reported that the FBI is setting up command centers in all of its 56 field offices across the country to monitor potential terror threats.

The warnings follow deadly attacks by ISIS last week in Tunisia, France and Kuwait that killed scores of people.