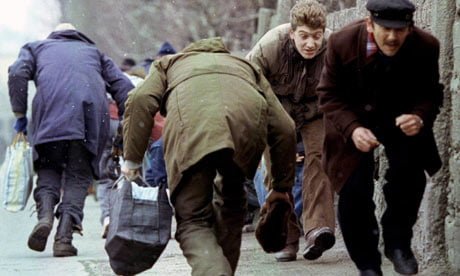 Editor’s Note: This is about way more than just the food stamps, or the jobs, or the statistics of the day. As Michael Krieger astutely notes below, this system is creating an “oligarch serfdom” where the majority of people are either poor or dependent upon the system/individual oligarchs for their financial and physical survival.

It may not be a return to manor & plantation slaves labor, but it is a system where people can’t own their own assets, or certainly have a hard time with it, even if they work hard and play by the rules. Society itself is transforming into an electronic prison where debt perpetuates the oppression, and the titled table drives all the wealth into the oligarchy – the wealthiest of the wealthy at the top who steer the politics, the economy, the industry and the media in a great combine. The Federal Reserve and its keepers have caused our misery… and it is only just beginning.

Welcome to the Recovery – 1 Out of 7 Americans (45.5 Million) Remain on Food Stamps

The following article from the New York Times is shameful in many ways. While the paper is forced to cover the undeniable fact that real wages for the lowest income Americans have plunged during the so-called “economic recovery” over the past six years, it fails to actually pin blame on the undemocratic, oligarch institution most responsible for this humanitarian crisis: The Federal Reserve.

Of course, I and many others have been saying this for years, but now more than half a decade into what is supposed to be a recovery, people are finally being forced to admit what this really is —  large scale theft.

In fact, Ben Bernanke and his crew of upward wealth distributing academics have pulled off the greatest wealth heist in American history. In its wake we have been left with a hollowed out, asset striped Banana Republic. Thanks for playin’ Main Street. Or more accurately, thanks for being played.

– From the post: The Oligarch Recovery – Study Shows Real Wages Have Plunged for Low Income Workers During the “Recovery”

More than six years into Dear Leader’s glorious economic recovery, 45.5 million Americans, or one in seven, remain on food stamps.

I’d say that’s a problem, but I don’t want to be accused of “peddling economic fiction.”

During the 2007-2009 recession, state and federal governments actively encouraged people like Crofoot to take advantage of the aid. Millions did, and many are still claiming benefits. Enrollment in the Supplemental Nutrition Assistance Program, the formal name for food stamps, remains near record levels, even as the unemployment rate has fallen by half.

“When unemployment was rising people said enrollment would fall sharply when things got better,” said Parke Wilde, an associate professor of nutrition policy at Tufts University in Boston. “That hasn’t happened.”

About 45.4 million Americans, roughly one-seventh of the population, received nutrition aid last October, the most recent month of data. Unemployment was 5 percent that month. The last time joblessness fell to that level, in April 2008, 28 million Americans used food stamps, and the program cost less than half of what the government paid out last year.

The uneven recovery has swelled the ranks of long-term unemployed and reduced the number of people working or looking for work, further boosting demand. Even for those with jobs, pay may be lower than in the past: In real dollars, SNAP recipients in 2014 had net incomes of $335 a month, the lowest since at least 1989. Able-bodied, unemployed adults aged 18-49 who don’t have children are supposed to be limited to three months of food stamp benefits during a 36-month period. That can be extended during tough job markets, a provision that’s boosted the percentage of recipients who fit that description to 10.3 percent in 2014 from 6.7 percent in 2007.

But isn’t the job market supposed to be strong?

I think it’s clear who’s actually peddling economic fiction, and it’s not me. For more on the oligarch recovery, see:

The Oligarch Recovery – U.S. Military Veterans are Selling Their Pensions in Order to Pay the Bills

Use of Alternative Financial Services, Such as Payday Loans, Continues to Increase Despite the “Recovery”