Recession Confirmed: “Even The Bureau of Labor Statistics Has Run Out Of Bullsh*t” 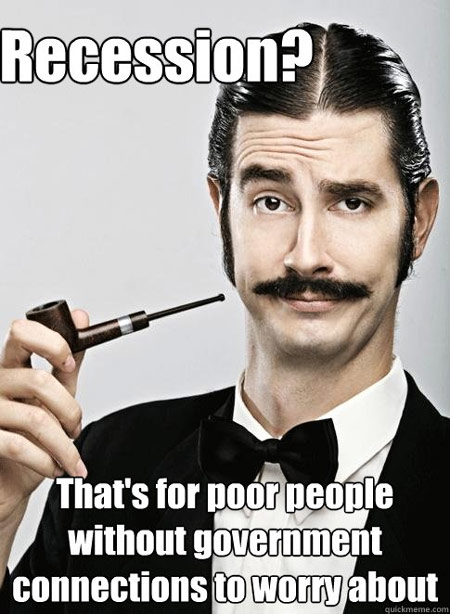 The following analysis was originally published by James Quinn at The Burning Platform. As always, Jim gives us some key insights into what the government is saying is happening and what is actually happening. As you may have guessed, all of the “official” statistics and reports over the last several months and years are nothing more than conjecture. There is no recovery. In fact, as Quinn explains, a recession has now been confirmed.

Here’s the reality of the situation – from James Quinn:

It sure is lucky those Ivy League educated economists at those Wall Street criminal banks are paid millions per year. How else could we get such accurate forecasts about job growth in the U.S. These mental midgets predicted 245,000 new Obama jobs (bartenders, waitresses, house cleaners, clerks, fry cooks) in March. Even the BLS has run out of bullshit and lies. Those dramatic job increases in January and February were cut by 69,000 jobs. That is a 13% error. If I make a 13% error doing my job, I’d be fired. The BLS government drones have the power to move markets with their bullshit reports. It’s funny how the negative revision is put at the very end of their 2,000 word press release.

But getting back to the accuracy of Ivy League educated Wall Street economists – they missed by 50%. That entitles them to a $250,000 bonus. The Establishment Survey showed a pitiful 126,000 increase in low paying service jobs in March. Get prepared for the usual weather excuse. They’ve been using it for the last four months. How many companies make hiring decisions based on the weather outside? Really? Do these highly educated assholes actually expect us to believe the temperature outside stops companies from hiring? Hysterically, the BLS says that 72,000 phantom jobs were created by new companies, even though we know for a fact that more companies are closing than opening. This 126,000 number will be revised to a negative number two years from now in a press release on a Friday afternoon.

And it gets better. The Establishment Survey is the good news. The Household Survey, that calculates the fake unemployment rate, had even more dreadful results. It showed only 34,000 more people employed than last month. It shows only 130,000 more people employed YTD versus the 390,000 in the other survey. Which number do you not believe the most? 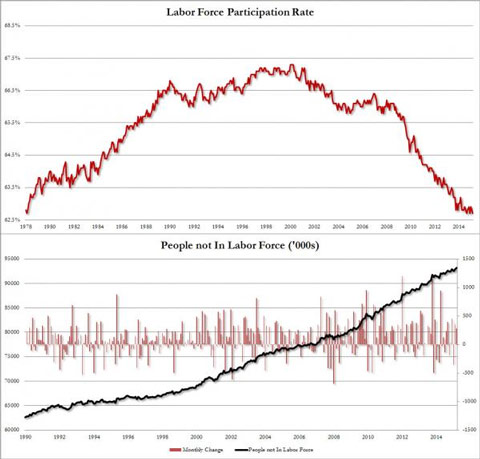 So according to the BLS’ own numbers, the working age population has gone up by 357,000 since January, while 130,000 people became employed, but the unemployment rate somehow fell from 5.7% to 5.5%. Anyone with two brain cells has to be stifling their laughter, as the BLS drones try to argue that 631,000 working age Americans voluntarily left the workforce and aren’t really unemployed. The gall of these government scumbags is off the credibility charts. They expect critical thinking individuals to believe the labor participation rate is at a 35 year low by choice. What a crock of shit. The fact is that at least 9 million more people want jobs and don’t have them. That makes the unemployment rate at least 11%, even by their calculations.

By calculations used before the government became captured and propaganda became the method of controlling the proles, the unemployment rate is actually 23%. Which figure seems more accurate to you? 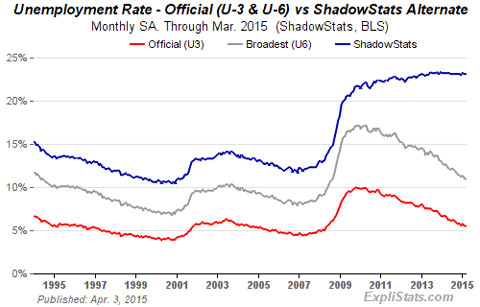 Anyone living in the real world knows the economy has clearly been going into the tank since the Fall of last year. Since November the number of people leaving the labor force is virtually the same as the number of people getting jobs. And of course we have the 2.1% annual increase in wages. Wage growth has stagnated at 2% since 2009. Have your daily living costs stagnated at 2% since 2009? Food costs, health insurance (thanks Obamacare), rents, and a myriad of other daily living expenses are up 5% to 15% over the last year.

So even the government drones have to admit recession has arrived. The Atlanta Fed already is predicting a 0.0% GDP in the first quarter. The entire 2.2% GDP in the 4th quarter was due to increased spending on Obamacare. Real wages are negative. Consumer spending is in the toilet. And Obama is busy telling the rest of the world how to run their countries at the point of cruise missiles. Sounds like a recipe for success. The rich know what to do. Buy stocks because Janet will keep the stock market soaring.

For more commentary and analysis visit The Burning Platform