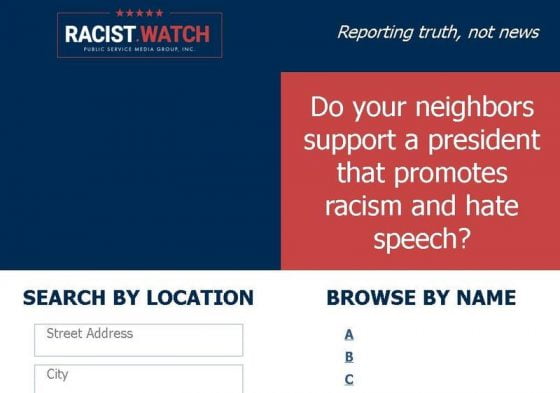 Apparently, it’s not enough for the left to just spit on supporters of President Trump.

For an apparent activist group called ‘Public Service Media Group’, outing Trump donors across America is what really makes the difference as triggered leftists panic that all they have is #NotTrump as they head into the 2020 election campaign.

PJMedia’s Megan Fox was the first to expose the site “Racist.Watch” mocking the site’s designers and the activists’ slogan “reporting truth, not news”…

“Look how many are even in deep blue New York City! If anything, people with Trump Derangement Syndrome are going to flip out when they search their neighborhood and find themselves surrounded by “racists.” I think they’re going to need a bigger safe space.”

But since her first report, the site has been taken down…

Finally, as one long-time Washington-watcher noted, rather ominously, “this is how civil wars start.”

But we give PJMedia’s Megan Fox (not that one) the last word:

”  It’s my suggestion that everyone needs to look up their address on this site right now and identify people near them who are clearly decent, patriotic Americans and go bring them a basket of muffins or something. Go make a new friend today. Thanks “Racist Watch,” you demented loons. “