Puerto Rico Debt Bomb About To Explode: “Social Unrest May Be Unavoidable” 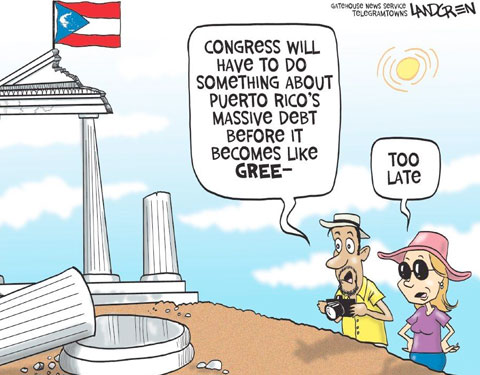 Editor’s Comment: Once again we see the failure of the system with Puerto Rico which took on more debt than it could possibly repay; we see the failures of the bloated system of socialism, which will now fail its welfare recipients, its pension holders and its people in general. Like so many other places in the world, we are about to see the recipients of easy credit feel the crunch when it all comes due, and there is no way in hell to repay.

Puerto Rico is almost certain to default and the debt could set off a tidal wave of contagion that could drag down the world financial system; in the meantime it will be the United States’ problem to deal with, yet another liability for the overburdened taxpayers of America. The system is rigged for failure, and the hot potato is just being passed around. Which crisis will crash it all? Who knows, just keep moving…

Puerto Rico Is About To Default: Your Complete Guide To An Island Debt Debacle

Last week, we brought you the latest from Puerto Rico’s debt debacle. The commonwealth is desperately trying to restructure some $72 billion in debt while staring down a $354 million bond payment due on December 1.

As we discussed at length on Friday, some $270 million of what’s due next week is GO debt guaranteed by the National Public Finance Guarantee Corp. Defaulting on that is bad news and as Moody’s warned earlier this month, a missed payment on the commonwealth’s highest priority obligations “would likely trigger legal action from creditors, commencing a potentially drawn-out process absent swift federal intervention.”

Make no mistake, federal intervention is likely to be anything but “swift.”

A Senate judiciary committee headed by Iowa Republican Charles Grassley will meet on December 1 to discuss a legislative proposal to assist the Padilla government, but it’s hard to imagine that a decision will be made in time to avert at least a partial default.

Ultimately, the decision will be between paying bondholders and ensuring that the government can continue to provide public services, and just as Greece prioritized pensions over IMF payments last summer, Padilla isn’t likely to sacrifice the public interest at the altar of the island’s debtors.

So, as the clock ticks, we bring you the following helpful guide courtesy of Bloomberg who has made a “list of the island’s debt, how much is outstanding, when major monthly payments are due, and the source of funds that back the securities.”

As a reminder, Puerto Rico’s Treasury Single Account likely has negative cash balance, which, according to Height Securities analyst Daniel Hanson, “will make it ‘nearly impossible’ to meet all government payroll obligations over the next six weeks.”

In other words, even if the government does default in order to save money for the provision of public services, social unrest may now be unavoidable.