Pope Goes Full Doomsday: “For Those Who Celebrate Christmas… It May Be Their Last”

Speaking before a crowd Pope Francis has made a frightening prediction. With wars raging the world over this may be our last Christmas. 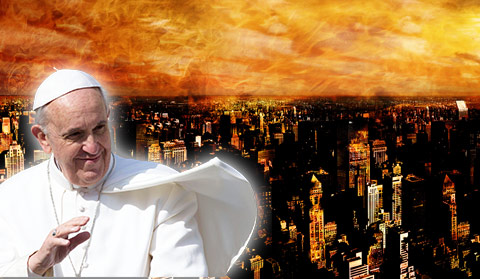 In their book Petrus Romanus authors Tom Horn and Cris Putnam made two startling predictions. In 2012, while Pope Benedict was still in office, they predicted the occurrence of an event that had not happened for over 600 years – Benedict’s abdication of the Papacy. When Pope Benedict resigned early the following year it came as a total shock to the one billion Catholics worldwide. The two researchers, who jokingly say their inspiration was the Holy Spirit, have remained tight-lipped about how they were able to forecast an almost unprecedented event so accurately.

But as incredible of a prediction as it was, it is nothing compared to the second one Horn and Putnam put forth. The two cite a 600-year old prophecy by Saint Malachy who, through inspiration from God reportedly penned the names of the next 112 Popes in succession. As it turns out, Benedict’s resignation would lead to the eventual election of Pope Francis, the 112th person on the list. Where things get scary is that the Prophecy ends with Francis – after him Malachy listed no more successors. The prophecy itself refers to this final pope as “Petrus Romanus,” or Peter the Roman.

According to Malachy’s prophecy the the world is headed into dark times:

“Who will pasture his sheep in many tribulations and when these things are finished, the city of seven hills will be destroyed, and the terrible or fearsome judge will judge his people.

Whatever your thoughts on prophecy or prediction, Pope Francis holds incredible influence over the some one billion Catholics worldwide. He is after all, the successor to Peter, the first Pope and direct disciple of Jesus Christ. So when the Pope speaks his words have serious ramifications for the Church. Within the last couple years he has already caused controversy both within the Church and the broader Christian public surrounding his thoughts on climate change, gay rights, and wealth distribution, with many saying that his changes to long-held doctrine could lead to the end of the Catholic Church as we know it today.

But his latest warnings could spell the literal End of Days

In a solemn sermon at the Vatican, Pope Francis has announced that Christmas this year will be a “charade” due to the fact that the globe is currently engaging in World War 3.

“It’s all a charade. The world has not understood the way of peace. The whole world is at war,” he said grimly.

During Mass at Casa Santa Maria the Pope then made a frightening prediction and one that would fulfill prophecy by suggesting that this year’s Christmas celebrations may be our last:

We are close to Christmas. There will be lights, there will be parties, bright trees, even Nativity scenes – all decked out – while the world continues to wage war,” he said earlier in December.

The Pontiff, who turned 79 on Thursday, elaborated on his views this weekend, telling a crowd, “While the world starves, burns, and descends further into chaos, we should realise that this year’s Christmas celebrations for those who choose to celebrate it may be their last”.

Is Pope Francis simply assessing, like many have, the dire situation around the world as it relates to economic and geo-political strife? Or is he aware that he is, in fact, destined to be the Final Pope who oversees not just the destruction of the Church, but the entire planet?

Prepare For Any Disaster – The Prepper’s Blueprint

The Book: Petrus Romanus: The Final Pope Is Here