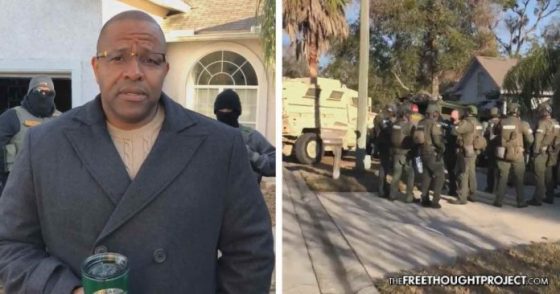 The Clay County Sheriff’s Department just used a small army of troops and MRAPs to bust some kids with a little weed and they are bragging about it on video.

Orange Park, FL — The Clay County Sheriff’s Department is receiving heavy backlash on social media this week after making a video of a SWAT raid in which hundreds of thousands of dollars of police resources were used to bust a handful of kids who had some marijuana.

In the ominous video that looks more like a terrorist organization threatening its enemies than public servants solving crimes,  Clay County Sheriff Darryl Daniels taunts his massive militarized police army and how it was just used to kidnap a bunch of young people for having marijuana.

Masked men carrying AR-15s, multiple Mine-Resistant Ambush Protected vehicles equipped with battering rams, and what looked like an entire platoon of tactical soldiers were all dispatched Friday morning to the home to serve a narcotics search warrant.

In the video, Daniels claims his raid netted him 15 arrests. However, according to arrest records, only five young adults were charged.

As the ‘copaganda’ video begins, the person filming is at the other end of the street and filming the entire scene. There are more than a dozen kids sitting on the sidewalk in disbelief at the massive army that was just deployed to bust them for having marijuana.

“Are you kidding me?” one of the detainees says as the cop walks by filming them.

As the person filming walks down the street, it looks like a scene out of Fallujah, Iraq. However, these ‘soldiers’ weren’t going after dangerous foreign terrorists or even domestic child traffickers, or murders, or anything of the sort—they were going after kids selling a plant.

Standing between two MRAPs and in front of a small army of masked men is the Sheriff who is waiting patiently for the cameraman to arrive so he can gloat to the world about using hundreds of thousands of dollars worth of taxpayer money to arrest some kids with pot.

“I say it time and time again,” Daniels said in the video. “And folks don’t seem to believe what I’m saying. As the sheriff of Clay County, I’m telling you that if you want to commit crimes in the county, you’ve got options: You can stop what you’re doing. You can leave Clay County. Or, you can be on the receiving end of this.”

The sheriff then walks into the home—with baby pictures on the wall behind him—to issue his ominous warning and flex his almighty drug war army.

“One day,” says Daniels, “You’ll be sleeping at night, or early one morning and you’ll hear a bang and a lot of noise. And, the end result and outcome will be me, standing in your living room like I said, drinking my morning cup of coffee.”

Daniels then takes a big swig out of his coffee mug and responds once more by gloating to the camera. “Fifteen going to jail—three big gulps.”

After the raid, the sheriff’s department posted the video to their Facebook page where the internet proceeded to tear them apart. In the description under the video, the department claimed to have “seized heroin/fentanyl, marijuana, drug paraphernalia and other evidence related to narcotics distribution.”

Although they claimed to have seized heroin/fentanyl, TFTP pulled the arrest records from the raid and not a single person was charged with possession of heroin or fentanyl.

William Endres was the homeowner which is why he is facing the serious chared listed above.

After the video was posted to Facebook, the department received far more backlash than praise.

“This was hillarious. Thanks for the morning comedy. Great to see all you big bad swat members busting out windows of some little kids. GREAT SHOW OF FORCE. Yall must have been excited to find something to do. Brought every truck availble. Good job managing resources. And if this was a big bust wouldnt you be proud to show it off? Where is it?” one Facebook user asked.

“I’d like to say good job, but Militarization of police, and how they use their military toys and training against citizens, is becoming a major problem in this country,” wrote another.

“The stupid belief that the war on drugs can ever be won …your bleeding the American people on both sides…those raids cost hundreds of thousands of dollars only to put them in prison where they get 3 hits and a cot on the tax payer dime also …” wrote another.

Below is an example of what happens when cops are given runaway budgets to arrest people for arbitrary substances deemed illegal by the state.

They will build armies to rob and kidnap people all to fill prisons and make a profit—all the while, real crimes like murders, rapes, and thefts are put on the backburner, or entirely ignored, allowing real criminals to walk free.