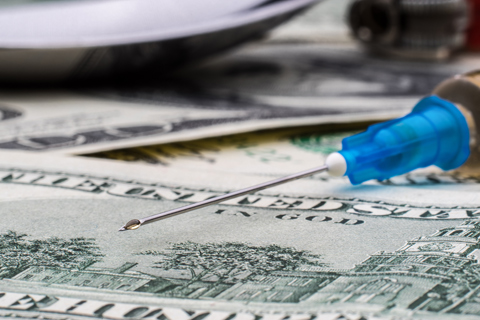 Remember when the American people were told that insurance would be free for the poor and affordable for the middle class? You know, back when we had to wait for the Affordable Care Act to be passed before we found out what was in it?

Within weeks of the program finally launching Americans saw an immediate jump in their monthly health insurance premiums – up to a quadrupling for some families.

As it turns out, insurance providers aren’t done yet. Apparently, quadrupling your rates just wasn’t enough to cover the health care costs for the millions of people who are paying absolutely nothing into the system but continue to receive the benefit of expensive prescription drugs and costly increases in medical procedures.

As a result, by the end of this year you will see your monthly premiums skyrocket, in some cases as high as 50%:

Why The US Consumer Is About To be Crushed: The Obamacare Inflationary Deluge Arrives
Via Zero Hedge

For the past three years, the biggest argument supporters of Obamacare would trot out every single time when faced with opposition to the mandatory tax, would be that despite widespread predictions of soaring prices, US medical care service costs had remained low and even, on occasion, declined (we leave aside the lack of discussion about soaring deductibles which are recurring “one-time” charges incurred whenever anyone does need medical care, and whose weighted impact on overall medical outlays is dramatic).

A big reason for this delayed increase in prices is that many insurers were unable to gauge the full base-effect impact of Obamacare on their P&L: after all, effective implementation of Obamacare had been materially delayed thus preventing an apples to apples comparison of incurred fees versus revenues.

All that changed moments ago when core US inflation finally spiked the most since 2013 driven by a 0.7% monthly surge in medical care service costs: the highest since 2007! 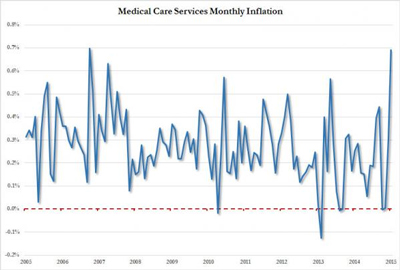 What’s far worse for the troubled US consumer, this is just the beginning. Because after finally digesting the true cost of Obamacare, any recent insurance prime hikes will seem like a walk in the park compared to what is coming.

According to the WSJ, key insurers in some states are proposing hefty rate boosts for plans sold under the federal health law.

All of them cite high medical costs incurred by people newly enrolled under the Affordable Care Act.

The irony is that while the Obama administration “can ask insurers seeking increases of 10% or more to explain themselves, but cannot force them to cut rates. Rates will become final by the fall.”

Supporters of free socialized health care were bewildered back in 2013 when their new insurance premiums took hold and they realized that it was they who would have to cover the bill.

California residents are rebelling a bit against Obamacare, with thousands shocked by the sticker price and rethinking their support, saying that what seemed wonderful in principle is not translating so well into reality.

As Pam Kehaly, the president of Anthem Blue Cross in California, reported, she received a letter from one woman who saw her insurance rates rise by 50 percent due to Obamacare.

“She said, ‘I was all for Obamacare until I found out I was paying for it,’ ” Ms. Kehaly said, in the Los Angeles Times.

Source: We Told You It Wasn’t Free: “I Was All for Obamacare Until I Found Out I Was Paying For It”

Ms. Kehaly and millions of others like her were ardent believers in helping those “less fortunate” by taking money by threat of force or imprisonment from “life’s lottery winners.”

What they didn’t understand at the time, and are likely refusing to admit today, is that under the communist philosophy that pervades much of our legislative infrastructure anyone who actually has a job and money left over after essential household expenses are paid is a lottery winner, and thus, will be taxed by the State for the greater collective.

Socialism is great until you realize it’s your money that is being seized to fund it.