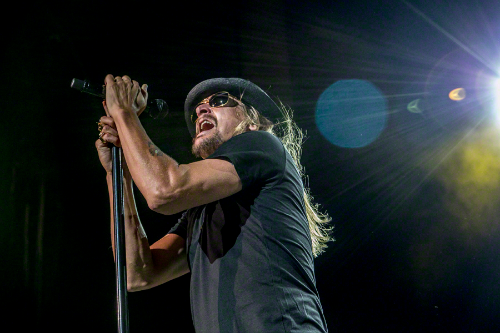 I’d wager that most liberals are still in a bit of a shock over the fact that Donald Trump is in the White House. Never in a million years did they expect a brash, unapologetic billionaire and former reality TV star to win the highest office in the land. It was simply unthinkable.

Well, the Left should probably get ready for another unexpected election loss, because another eccentric conservative celebrity has decided to run for office. Earlier this month, Kid Rock, the famous country/nu metal/rap musician announced that he was going to run for the senate seat in his home state of Michigan. Much like what happened when Trump announced his presidential bid, most observers assumed that Kid Rock’s announcement was just a publicity stunt. That notion was quickly dispelled once Kid Rock confirmed his ambitions on Twitter.

I have had a ton of emails and texts asking me if this website is real… https://t.co/RRVgISDFeq The answer is an absolute YES. pic.twitter.com/uYCUg6mjW1

And once again, much to the surprise of the establishment, the musician is surprisingly popular. A recent poll from Delphi Analytica showed that Robert “Kid Rock” Ritchie was preferred by voters, when compared to incumbent Democratic Senator Debbie Stabenow.

To gauge Ritchie’s chances in a hypothetical general election matchup, Delphi Analytica conducted a poll from July 14-18 of 668 Michigan residents. Of respondents who stated a preference between Debbie Stabenow and Robert Ritchie, 54% stated they would vote for Ritchie while 46% said they would vote for Debbie Stabenow. These results could indicate that Ritchie is a popular figure in Michigan, Debbie Stabenow is unpopular, or some combination of concurrent trends. The relatively large, 44%, number of undecided respondents may be due to the early stages of the campaign.

And if you don’t think there’s a chance in hell that Kid Rock would win that Senate seat, ask yourself if this sounds familiar:

The star is in a decent position to run. He has very high name recognition in the state of Michigan and has a loyal fan base that enjoys his brash approach to life. He also has a net worth between $80 and $120 million, according to the Federalist, so he could easily fully fund his own campaign without outside party funds.

Is it any wonder why progressives like Elizabeth Warren have been warning their supporters to take his election bid seriously?

“I know a lot of people are thinking: this is some sort of joke, right?” Massachusetts Sen. Elizabeth Warren wrote in an email to supporters obtained by CNN and first reported by the Boston Herald.

“Well, maybe this is all a joke — but we all thought Donald Trump was joking when he rode down the escalator at Trump Tower and announced his campaign, too,” she said.

“And sure, maybe this is just a marketing gimmick for a new album or tour — but we all thought Donald Trump was just promoting his reality TV show, too,” she added.

What a strange time to be alive.