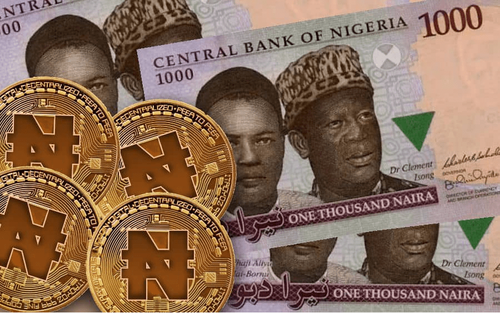 Nigeria has started to limit ATM withdrawals to $45 in an effort to force its slaves to use master-controlled digital payments. The good news is that Nigerians seem to “get it” when it comes to not wanting to be subjected to enslavement.

A staggering number of Nigerians love Bitcoin, but hate government cryptocurrency (CBDCs). According to ZeroHedge, in April, leading cryptocurrency exchange KuCoin noted that 35% of the adult population in Nigeria – roughly 34 million adults aged 18-60, own bitcoin or other cryptocurrencies. But when it came to the country’s Central Bank Digital Currency (CBDC), the eNaira, it was a massive failure.

According to Bloomberg, only 1 in 200 Nigerians use the eNaira despite government-implemented discounts and other incentives, implemented as desperate measures to increase adoption. Now, the government is looking to boost digital payments by limiting ATM withdrawals to just 20,000 naira, or roughly US$45 per day, Bloomberg reports, citing a circular sent to lenders on Tuesday. The previous withdrawal limit was 150,000 naira (US$350).

The action is the latest in a string of central bank orders aimed at limiting the use of cash and expand digital currencies to help improve access to banking. In Nigeria’s largely informal economy, cash outside banks represents 85% of currency in circulation and almost 40 million adults are without a bank account.

The central bank last month announced plans to issue redesigned high-value notes from mid-December to mop up excess cash and it’s given residents until the end of January to turn in their old notes. The bank also plans to mint more of the eNaira digital currency, which was launched last year but has faced slow adoption. Bloomberg

According to ZeroHedge, the new rules which will take effect on January 9 and will ban the cashing of checks above 50,000 naira (US$112) over-the-counter, and 10 million naira (US$22,480) through the banking systems. Point-of-sale cash withdrawals have been capped at 20,000 naira ($45).

Meanwhile, banks are only allowed to load their ATMs with 200 naira denominations and under, while individuals and corporations will be allowed to cash a maximum of 5 million and 10 million naira respectively if there are “compelling circumstances not exceeding once a month,” and which will be subject to enhanced due diligence along with processing fees, according to the central bank. Such withdrawals will also require the approval of a bank CEO.

CBDCs will be introduced all over the world. It is up to the public whether they want to be further enslaved. Unfortunately, we will see many of our fellow Americans, including family members and friends submit willingly to their own permanent subjugations.