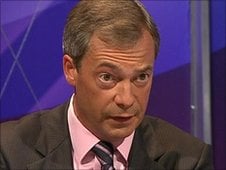 You may remember Nigel Farage as the EU parliament member who tore into the President of the EU and most recently held a funeral for the Euro (complete with casket, pall bearers, and procession) on the streets of London.

Mr. Farage is a former commodities broker on the London Metals Exchange, so he understands the financial markets and monetary system (unlike 99% of the other politicians in the EU and DC), as well as the implications of the current debt crisis facing not just Europe, but the entire world. You’ll rarely hear a politician come out from behind the curtain as Nigel Farage does. Like most of us, he’s not very optimistic about what’s to come, and he lays out his views in an interview with King World News which is well worth listening to in full:

The banking system is just in the most awful mess. And of course, what will happen, and this is what the markets fear, is that once we get countries like Greece defaulting we then have an admission that the debts they owe to these banks are not going to be paid back. That, in essence, is what default really means. So, I’m afraid we’ve just had the most catastrophic series of people running banks, they’ve been encouraged by big government, the whole concept of financial regulations has failed, and we are indeed heading into very dangerous waters.

I think that default of Greece and Portugal, and possibly Ireland, too, are inevitable.

I think the worst in the financial system is yet to come, a possible cataclysm and if that happens the gold price could go (higher) to a number that we simply cannot, at this moment, even imagine. Gold is in an uptrend and professional traders should be buying the dips.

Listen to the full interview (12 Minutes)

There is simply no way that Greece, Portugal and likely a host of other countries (not just Ireland) will not eventually default. We really don’t know the extent of the debts and leverage involved because all of the monetary and financial machinations over the last ten, and especially three, years have been done in secret. There are likely hundreds of banks and many governments that have significant exposure to toxic assets – and not just in Europe. Our own Federal Reserve reportedly holds over a trillion dollars in assets that are essentially worthless.

If we were, as former Secretary Hank Paulson said, “very, very close” to meltdown in 2008, and they were threatening us with tanks on the streets of America, and absolutely nothing has been resolved, then what’s in store for us going forward?

We can’t stress enough how serious this crisis is for the general global economy and the stability of the entire social and political systems of developed Western nations. Trillions of non-existent dollars and euros have been committed to resolving this crisis, and we are now worse off than when we started stimulating in 2008.

Do not underestimate what’s happening here.