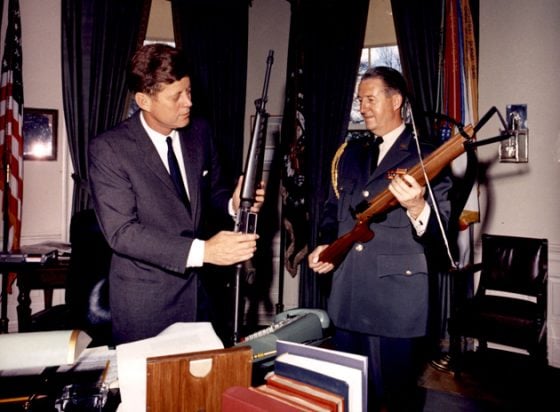 New calculations in the ongoing effort to uncover what happened to President John F. Kennedy shows he wasn’t shot by a “grassy knoll” gunman.  The new paper “confirms “JFK was shot from behind and the official story, but is that “case closed?”

It has been 55 years since United States President John F Kennedy was assassinated. Countless theories have, since then, surfaced in an attempt to explain how the events really went down, but many understand we aren’t getting the whole story. But most still say Lee Harvey Oswald is to blame.

According to The Daily Mail, this new evidence suggests Lee Harvey Oswald was a “lone shooter.”

New calculations based on the video recordings of the assassination indicate that the mysterious movement of the president’s head after being shot – a crucial detail in the grassy knoll theory – was the result of a recoil effect. -The Daily Mail

The videos further show that the fatal bullet impact was immediately followed by a forward head snap, adding further evidence that JFK was shot from behind, as the official autopsy (government approved opinion) indicated. “Rather than gloss over this fact, as has been done by most previous authors, including anti-conspiracy authors, I chose to study and model it explicitly,” said Nalli, Senior Research Scientist at IMSG, Inc.

According to the study’s author Dr. Nicholas Nalli, this initial forward movement can be seen in the famous footage captured by civilian Abraham Zapruder, who filmed the doomed Dallas motorcade on November 22, 1963, using an 8-mm home video camera, and inadvertently recorded the assassination.

The widespread grassy knoll theory centers on a number of oddities in the initial findings and footage of the assassination itself, which showed that the president made a “back and to the left” movement just after being shot.

The force calculations include known information from the crime scene, including bullet mass, speed, and diameter, as well as the camera shutter frequency and autopsy measurements and according to Nalli, the footage of the event supports the conclusion that Kennedy was shot from behind.

According to the analysis, the bullet deformed after colliding with the skull, transferring most of its kinetic energy to the head.

Some of this energy would have driven an impulse force immediately after, propelling the target forward about 2 inches (5 centimeters) over the course of one shutter cycle.

The rest of the kinetic energy would have gone into the soft tissue, Nalli writes.

A second backward acceleration seen in the President’s upper body after the shooting was likely a nervous system reaction to the “massive brain injury.” –Deacon Chronicle

But did we really expect someone to come out and “change the narrative” we were spoon fed about JFK’s assassination? Notice what’s in bold print above. “Was likely” meaning he doesn’t know that for sure, and can’t explain it with his theory either, he’s just wanting us to all believe it.

We are still being told what we are always told: this is how it happened, stop questioning the official narrative.