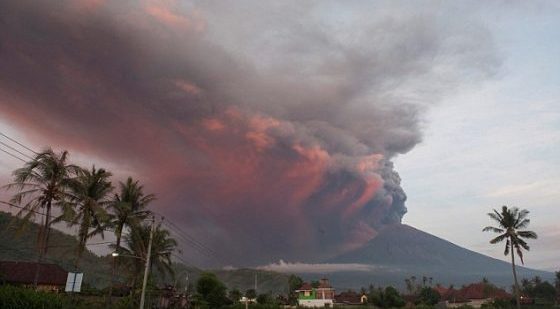 Volcanic ash rained down on the villages which are spotting the countryside in Bali. Mount Agung erupted again sending a massive plume of ash into the sky.

The Bali volcano threat level has been raised to the highest possible level, putting it at a level 4, while the aviation ash warning is now orange. The latest Volcano Observatory Notice for Aviation (VONA) was issued after Mount Agung erupted yesterday morning following several days of calm.

The tourist season has been widely interrupted because of Mount Agung’s volatile and unpredictable behavior. This evening Mount Agung was still sending a plume of ash almost 5000 feet (1,500 meters) into the sky in what was a beautiful yet ominous sign of the ongoing threat. The Volcanology and Geological Disaster Mitigation Agency (PVMBG) has said that greyish-white plumes of ash have soared as high as 6500 feet (2000 meters) above the crater. Hot magma produced an eerie red glow just above the crater as cold lava mudflows have poured down the slopes.

As previously reported by SHTFPlan, more than 70,000 evacuees have fled their homes and are staying in more than 230 shelters across Bali, according to the National Agency for Disaster Management (BNPB). BNPB spokesman Sutopo Purwo Nugroho ash rained down on Temakung village at 7:50 am local time today when the volcano erupted and sent out ash once again.

PVMBG volcanologist Gede Suantika said there were seven eruptions of ash between midnight and 10 pm today, according to Indonesian news agency ANTARA News.  “Sometimes it is hard for the lava and magma to come out, and when there is pressure, it will spew ash,” he told Reuters.  Meanwhile, volcanic earthquakes are continuing to rock Mount Agung, prompting fears that a major eruption could be imminent.

The Indonesians have told about 100,000 people to evacuate from the radius of the danger zone surrounding the volcano.  The Mount Agung volcano, which is capable of very violent eruptions, has shown a marked increase in activity in the last few weeks, stoking fears of a repeat of the 1963 eruption which killed 1,100 people.