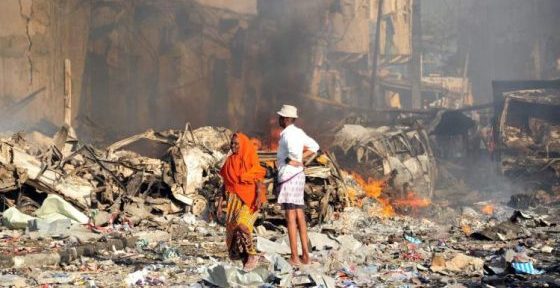 In what is now being called the “worst terrorist attack” ever on Somalia, at least 300 people have been declared dead after a truck bomb went off. The attack, which has also injured hundreds seriously is being blamed on militant group al-Shabaab.

The death toll in the bombing that hit the center of Mogadishu on Saturday may still continue to rise as some people are still missing and life-saving efforts are underway for those who suffered severe injuries. The scale of the loss makes the attack, which involved a truck packed with several hundred kilograms of military-grade and homemade explosives, one of the most lethal terrorist acts anywhere in the world for many years.

This major mass homicide was committed without guns, and the death toll dwarfs that of the Las Vegas shooting.  Monday morning, Somalia’s information minister announced that 276 people had died in the attack with at least 300 people injured. Within mere hours, however, Abdikadir Abdirahman, the director of Amin ambulances, said his service had confirmed that 300 people died in the blast. Some reports put the number of casualties as high as 500. “The death toll will still be higher because some people are still missing,” Abdirahman told Reuters.

Even more terrifying, is that the exact death toll may actually never be known because the intense heat generated by the blast meant the remains of many people would not be found. More victims continue to be dug from the rubble spread over an area hundreds of meters wide in the center of the city.

According to The Guardian, the bomb, which is thought to have targeted Somalia’s foreign ministry, was concealed in a truck and exploded near a hotel, demolishing the building and several others. Sources close to the Somali government said the truck had been stopped at a checkpoint and was about to be searched when the driver suddenly accelerated. It crashed through a barrier, then exploded. This ignited a fuel tanker parked nearby, creating a massive fireball.

The devastating bombing, which provoked international condemnation, will focus attention on the decade-long battle against al-Shabaab, an Islamist group, in Somalia. Earlier this year, Al-Shabab vowed to increase its attacks after both the Trump administration and Somalia’s recently elected president announced new military efforts against the group.

“There’s nothing I can say. We have lost everything,” said Zainab Sharif, a mother of four who lost her husband in the attack. She sat outside a hospital where he was pronounced dead after doctors tried for hours to save him from an arterial injury.

Muna Haj, 36, said: “Today, I lost my son who was dear to me. The oppressors have taken his life away from him. I hate them. May Allah give patience to all families who lost their loved ones in that tragic blast … And I pray that one day Allah will bring his justice to the perpetrators of that evil act.”

The president, Mohamed Abdullahi Mohamed, declared three days of national mourning and joined thousands of people who responded to a plea by hospitals to donate blood for the wounded. “I am appealing to all Somali people to come forward and donate,” he said. –The Guardian

Dr. Mohamed Yusuf, the director of Mogadishu’s Medina hospital, said his staff had been “overwhelmed by both dead and wounded. This is really horrendous, unlike any other time in the past.” Some the bodies and those critically injured were burned so badly that they were unrecognizable.