Millions Lose Power In Ohio and Indiana After Tornado: “It Looks Like A War Zone!” 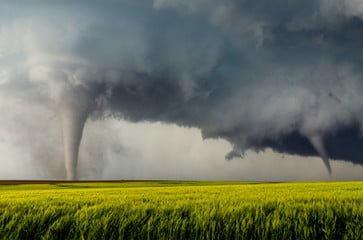 The tornado that ripped through Ohio and Indiana has left millions of Americans without power.  Right now, about 5 million still have no power and nine are dead after the latest installment in a two-week span of powerful tornadoes and thunderstorms which have devastated the Midwest.

State officials in Ohio told the press that they have confirmed at least seven people were injured in the storms. The town of Celina in Mercer County, about 80 miles north of Dayton, sustained extensive damage, prompting the Ohio Department of Transportation to employ snow plows to remove debris off Interstate 75. Across the region, the NWS issued 36 tornado warnings. –ZeroHedge

The agency confirmed a “large and dangerous” tornado on the ground near the suburb of Trotwood in Montgomery County shortly before midnight. “We probably have more than a handful of tornadoes that we need to look at on the ground throughout the region, maybe even more,” said John Franks, a meteorologist with the National Weather Service in Wilmington, Ohio.

The City of Montgomery said it was currently focusing on ‘life-saving’ measures. “A large, dangerous tornado touched down last night in northwest Montgomery County,” the county said in a statement. “We are focused on supporting life-saving measures, such as shutting down gas lines or locating people who are trapped by debris.”

One Dayton resident told NBC that a tornado destroyed her entire street, adding that she didn’t hear any warning sirens before the storm. A pastor at a church in northern Dayton said one of the storms destroyed his office. “I saw the clouds spin backwards and the trees began to sway uncontrollably and we took shelter,” she said. “I was standing on the porch that is no longer standing.”

“My corner office is no longer there,” Ritz said of his church building. “It’s in the parking lot.” Four shelters opened in Montgomery County overnight to offer cover, food, and water to distraught residents. Though ironically, one shelter lost power soon after opening.

Residents have been urged to boil their water before consumption as the power to water treatment plants has also been shut down.

The Mercer County Emergency Management Director says that emergency crews are focusing their efforts on search and rescue. Residents are asked to stay off roadways if possible. https://t.co/9GbvD8CyM9

The mayor of Celina said his town looked like ‘a war zone’ after the storms. “It looks in areas like a war zone, some of the houses were completely moved off their foundations and gone,” Celina Mayor Jeffrey Hazel told WDTN. At least one Dayton suburb, the town of Beavercreek, issued an emergency warning telling residents to watch out for gas leaks while crews worked to clear downed power lines.