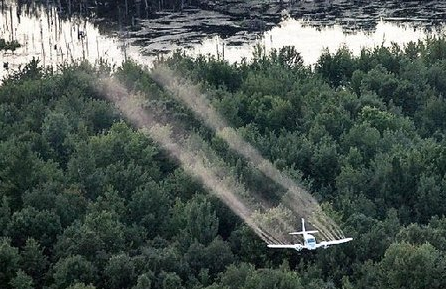 The Zika scare has not only stirred massive media hysteria; it has now unleashed a dangerous campaign to spray a neurotoxic chemical over the city of Miami and surrounding areas.

What damage it will cause remains to be seen, but its use as a means of controlling mosquitoes and stopping Zika should raise serious alarm bells, as its effectiveness has already been discredited and its risks are unacceptable.

The crew and aircraft used in the operation was flown in from Sarasota. The King Air Beechcraft fixed-wing, dual-engine plane is specially equipped with nozzles on the wing to disperse the chemical, called Naled, that is meant to kill adult mosquitoes that could be carrying the Zika virus.

Naled can cause respiratory problems in people who are exposed to it and long term exposure can cause possible neurological problems, according to Cornell University.

The plane and crew will fly back to Sarasota after the spray Thursday morning, but Mayor Gimenez has ordered aerial spraying to continue every seven days for the next four weeks.

However, authorities claim that the amount being sprayed over a 10-mile radius in South Florida is too little to cause harm.

But why would anyone trust what they say, or take any chances fighting fire with fire… especially if avoiding getting burned was the whole point in the first place?

Naled is an organophosphate insecticide first registered for use as an “adulticide insecticide” in 1959 primarily to control adult mosquitoes (#EPA Pesticides – Mosquito Control, 2007). Naled breaks down into dichlorvos in both animals and in the environment and has many health effects, both chronic and acute (#Cox, 2002).

The planes are releasing Naled (trade name Dibrom), an organophosphate pesticide that is considered one of the most toxic and, like many other organophosphates, has been banned in many places. Worse, it has been proven to be dangerous to pregnant women and its breakdown product, dichlorvos, causes actually causes – wait for it – microcephaly. Yes, really.

Exposed animals also required more trials than unexposed ones to learn an avoidance behavior, indicating a “severe deterioration in their memory and learning functions.”

Moreover, the use of insecticides to target adult mosquitoes (including Naled) is known to be one of the LEAST effective methods of controlling populations, and has produced only short term gains:

The U.S. Centers for Disease Control and Prevention has written that “adulticiding, application of chemicals to kill adult mosquitoes by ground or aerial applications, is usually the least efficient mosquito control technique.

Naled is no exception. For example, researchers from the New York Department of Health showed that 11 years of naled spraying was “successful in achieving short-term reductions in mosquito abundance, but populations of the disease-carrying mosquito of concern “increased 15-fold over the 11 years of spraying.

The very condition which caused the Zika scare will potentially affect more people thanks to the ludicrous decision to spray Naled… especially since the actual link between Zika and microcephaly has not been established by science and appears quite dubious.

As Mike Adams reported, Brazil’s problems with microcephaly has already been linked to the spraying of another neurotoxic organophoshate which has many of the same effects:

This Big Lie is repeated by the CDC which claims, without any scientific proof whatsoever, that “Zika infection during pregnancy can cause a birth defect of the brain called microcephaly and other severe fetal brain defects.”

This conclusion was reached by the CDC using epidemiological statistics, not rigorous scientific studies of cause and effect. In other words, the CDC observed that women in regions of South America that hosted Zika-carrying mosquitoes were suffering from microcephaly in their newborn children. From this, they concluded a cause-and-effect relationship between Zika virus and the developmental deformities. What they failed to recognize, however, is the presence of the dominant cause: All these same areas were also being sprayed with highly toxic larvicide chemicals that work by interfering with the nervous systems of insects.

Those same chemicals, when ingested by pregnant women, also cause neurodevelopmental deformities in human children.

Choosing to repeat this process in Florida won’t stop Zika, but it will put lives at risk.

This amounts to full circle retarded on the part of policy makers. This will be tragic for any and all mothers and babies who are harmed as a result.

Is Zika Outbreak Blowback From the Release of GM Mosquitoes? “Nature Finds A Way”