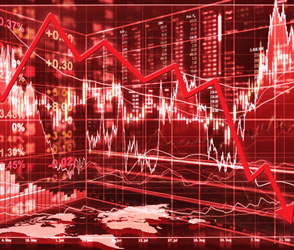 Editor’s Comment: It is as if a terrific catastrophe has been prepared to reset the power structure, only the biggest players in the game have already repositioned their assets and will be largely shield from the direct effects of what is coming.

This is very much a house of cards scenario, and anyone who has been foolish enough to put major portions in the traditional stock market is likely in for a devastating fall. The system is combining the dual aspects of illusory and usury to hold monopoly, and redirect wealth to the top. The algorithms are programmed to starve the masses out of their homes, and jobs and any claim to financial stability. Pay close attention to how they are reacting, and how they want you (and everyone else) to react to their decisions.

After years of giveaways to megabanks, marketed to the taxpayers as ‘quantitative easing,’ the crutches shoved under the banker-controlled global stock trade are about to snap. Bankers now say they are preparing for the collapse.

In June of 2015, former Congressman Ron Paul predicted that these crutches would fail, and the financial bubbles created by them would send the stock market into a free-fall.

The consequences will not be minor. Surprises will be many, since we are in uncertain waters and the world has never faced the gross misallocation of capital that exists today. The process is self-limiting. It will come to an end, and it’s not going to be far into the future.

Now, as chaos in the EU and weak corporate earnings create a tornado of uncertainty, banks are preparing for the worst.

According to CNBC quoting a major lender, banks are “preparing for an economic nuclear winter situation.”

The chaos in the market has major bank officials running for the hills. According to CNBC, European banks, in particular, have had a very tough six months as the shock and volatility around Brexit sent banking stocks south. Major European banks like Deutsche Bank and Credit Suisse saw their shares in free-fall after the referendum’s results were announced. In the U.K., RBS was the worst-hit, with its shares plunging by more than 30 percent since June 24.

On Sunday, a source, speaking on the condition of anonymity, due to the fact that revealing this information can get bankers killed, a source from a major investment bank told CNBC “that financial services firms have put together a strategy in place that takes into account the worst-case scenario that could happen by the end of this year.”

“This could mean triggering Article 50, referendum in other European nations leading to a break-up of the euro or sterling hitting below $1.20 or lower. The banks are ready for anything now,” the source said.

This grim warning comes after the Royal Bank of Scotland has warned its investors of a “cataclysmic year.” In an eerily ominous note to its clients early this year, the megabank predicted another worse case scenario.

Sell everything except high quality bonds. This is about return of capital, not return on capital. In a crowded hall, exit doors are small.