‘May the Farce Be With You’: School Locks Down Over Man in Stormtrooper Costume 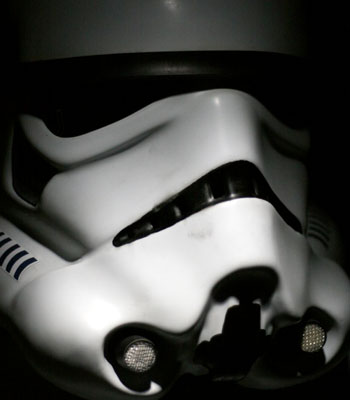 It was the worst Star Wars sequel ever – more a farce, than anything.

But intergalactic justice was served, apparently. Or maybe we just crossed over into a dimension without rights or even basic sense.

It was towards the end of the school day, and by all accounts, one George Cross was just passing by the Massachusetts elementary school in order to show off his newly-donned stormtrooper costume to friends.

But the 40 year old Star Wars geek was arrested before he could, after the school principal called police, concerned that she wasn’t sure the fake laser gun was just a plastic toy.

As the Guardian reported:

A Massachusetts man is facing charges after he was spotted outside a city elementary school dressed as a Star Wars storm trooper, complete with fake gun.

The principal called 911 to report a man with a gun, and the school was briefly locked down.

Admittedly, the relevant authorities didn’t believe the man posed a threat, and could have warned him or asked him to move along rather than  arrested him, but instead they created a panic situation that delayed the school day and brought everything to a halt.

“The principal did delay the dismissal of the school because of this entire incident,” said Donnelly. “The kids can’t get out, the parents can’t get in.”

George Cross, 40, of Lynn, was dressed in a white plastic “Star Wars” stormtrooper costume, and the gun was not real. But Lynn Police spokesman Lt. Rick Donnelly said that “the way things are today, you can’ have that.”

Donnelly said the principal thought the gun might be plastic, but since she wasn’t certain, she erred on the side of caution.

“Our feelings are that he was not there to cause harm to the kids, but he used bad judgment,” said Donnelly. “He did cause a disturbance and we can’t tolerate that.”

But we are told judge not lest ye have your own judgement called into question.

Why are both a principal and a police officer barred from using their own best judgment, and avoiding a pointless lockdown, a delayed school release and an all around heightened incident that they knew full well was not a threat to anyone?

“He did cause a disturbance and we can’t tolerate that,” Donnelly claimed, no doubt in reference to the disturbance in the Force triggered by Cross’ actions. Though he didn’t say it, Donnelly sensed a great disturbance, as if millions suddenly cried out terror, and were silenced by the sound of a weirdo tromping around outside a school playing make-believe.

Clearly common sense is among those things which cannot be tolerated.

The same paranoid state of overreaction that has gotten school kids suspending or disciplined for pretending to have a weapon at recess, or fashioning one out of a pastry, or bringing a plastic bubble gun (and many other incidents) has now created another scene – apparently straight from Star Wars.

The rhetorical question can be answered by anyone following the hysteria over schools and non-gun incidents, where increasingly there is pressure to enforce a policy against gun “thought crime.”

Anti-gun messages have been sent down through the school system, in the name of safety, to not only propagandize against 2nd Amendment rights, but to intimidate children and those in the community against their own expressions and thoughts.

Back in the Clinton Administration, a younger Eric Holder, now the former Attorney General, literally advocated “brainwashing” children about guns:

1984 is definitely here and it couldn’t be more ridiculous.