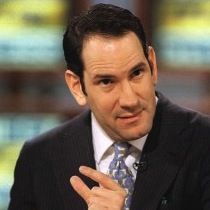 The show was being recorded live when Drudge happened to walk into the studio thinking Jones was on a short break.

Jones, who it appears has never met Drudge and whose reports are often featured at DrudgeReport.com, was in disbelief as Drudge is notorious for staying out of the media though his web site sees over 500 million monthly visitors.

Other than posting stories on his web site and an ominous tweet every so often, the media mogul has very little interaction with mainstream news or the public.

Drudge initially avoided the limelight opting to stay off-set, noting that he hasn’t had a picture taken in over eight years. But he eventually joined the show in a rare media appearance to discuss everything from the death of the internet as we know it to why he doesn’t need to be liked.

I have a clear perception what the internet is. In my mind, I’m free. I’m not defined by what they say the internet is… meaning Goldman Sachs, meaning who they invest in for the latest startup… meaning the latest Buzzfeed… or Salon…

There’s a lot of corporate makeover of the internet that I have not adapted to, simply put.

I am not a part of that system.

I just give it my all. I’ve learned how to take care of myself and detach from outcomes. Otherwise you can’t survive.

I have remained completely independent from all of them. I am not influenced by any of them.

I need no traffic from Google. I don’t care if I get one traffic referral from Google… or Bing… Or Yahoo or any of these others. It’s always been that way.

If you think of that setup, how rare that is because everybody is so hungry for referrals and likes.

Clip: The Death of the Internet

New Law Will Require a License to be a Journalist