Man’s Musical Instrument Mistaken For A Gun By 911 Caller 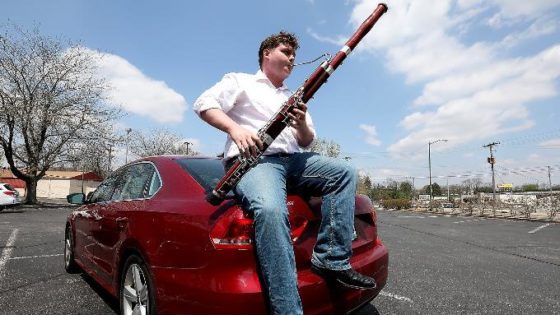 Eric Barga with his bassoon which was mistaken for a “long rifle.”

This is where we are at in human history: people cannot tell the difference between the musical instrument called the bassoon, and a gun.  Someone in Springfield, Ohio actually called 911 to report a “long rifle,” which turned out to be a bassoon.

On the afternoon of April 5, after giving three music lessons at Kenton Ridge High School, 22-year-old Eric Barga drove to Covenant Presbyterian Church for bell choir practice but arrived a half an hour early, at about 6 p.m.  Instead of going inside, Barga decided to enjoy the mid-50’s weather and play his beloved bassoon outside.   Barga pulled his custom-made Fox 610 red maple bassoon out of its case, sat on the trunk of his car in the refreshing air and began playing scales, reported the Springfield News-Sun. “There was a nice orange sky in the background,” he recalled. “It was one of the first nice days.”

Although, as Barga told the Springfield News-Sun, many confuse his bassoon for an oboe, he’s never had someone mistake it for a rifle.  Until that day.

About seven minutes after Barga began to play the instrument, Springfield police received a 911 call reporting that a white male in a jacket and jeans was sitting on the back of his car in the church lot with a long rifle. Listed under “additional information” on the dispatch form is what, in retrospect, must be considered a grace note: “Unknown of it was for sure.”

In an unofficial review of the incident at the request of the Springfield News-Sun, Springfield Police Chief Lee Graf said the difference in how police calls turn out in this new era of heightened awareness of the danger of firearms (translation: media propaganda and fear mongering campaigns) begins with the dispatchers. “They’re filtering everything through their experience,” he said.

Among one of those filters is the emotional state of the caller. “In this case, you have a citizen saying, ‘Hey, it doesn’t look right to me,’” along with a stated uncertainty about whether the object was a rifle, he said.  Armed with this information, at least “the officers know it’s possible” that there is a threat, “but it could be something innocent” as well. Another piece of information on the dispatch records communicates a lower level of threat, he said. Instead of being classified as a call involving a weapon, the call was dispatched as a “possible suspicious activity.”

Two units arrived on the scene just before 6:12 p.m. One of the units was Officers Tim Melvin and Sgt. Bill Sanders, a second with shift supervisor, Sgt. Bill Evans. “They didn’t immediately approach me,” Barga said. “I saw a police car, it’s a big police van, roll up really slowly” in a parking lot between the west side of the church and the east side of a former fitness center and previous Habitat for Humanity ReStore. “I wasn’t concerned that I was doing anything wrong.”

However, the officers were using a “tactical approach” but Barga didn’t react much at all, considering he was armed with a bassoon, but he remembers the feeling of the moment. “At this point, I realize they’re confronting me,” he said. “I put on a little dopey smile and said, ‘Did somebody call the cops on me?’”

Although he felt slightly tense, “I didn’t really feel threatened,” he said, adding, “I don’t get nervous. Years of music school (performance) beats that out of you.”  The notion that someone might have mistaken his bassoon for a rifle “never crossed my mind,” Barga said. “In the right kind of light, it looks like a bazooka,” he said, “but I don’t think it was the right kind of light.”

The officers “were all giggling” by the time they came to a stop, Barga said. One even asked him the million dollar question: “Is that a bassoon or an oboe?”