Magic Bullet: The Last Round You’ll Ever Need 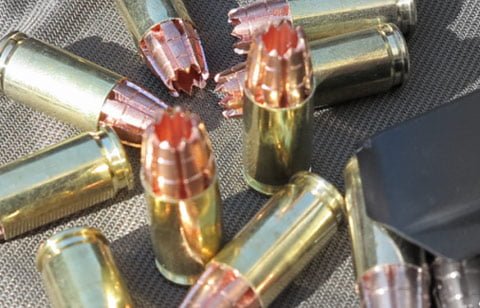 Find any gun enthusiast forum out there and you’ll no doubt come across a discussion about the best caliber rounds for stopping potential threats. While a well placed bullet of any caliber will pretty much do the job, G2R Ammo has developed a new round that will make even the worst shooters out there a force to be reckoned with.

Heralded as “the last round you’ll ever need,” the aptly named R.I.P. (Radically Invasive Projectile) cartridge may be the deadliest firearm ammunition ever developed.

Designed to maximize the dissipation of energy where it is needed and defeat every major obstacle in its path, there is truly nothing else like it.

At a glance, the differences in geometry between the RIP and any other bullet of the past are quite drastic.

Once the bullet penetrates its target, high velocity fragmentation will increase the effect of temporary and permanent cavitation. The 8 fragments sheared from the bullet cause many small permanent cavities around the main entry point.

This causes multiple wound channels that will effectively hit vital organs for the eventual complete termination of interest. The main mass base of the bullet can continue its path and cause a truly massive amount of tearing as the perforated tissue is stretched.

According to the manufacturer the RIP round will be developed in various calibers including 9mm, .38, .40, .357 and shotgun shells.

An Introduction to RIP:

Imagine for one moment that this chicken is a doped up criminal who has just broken in through your back door in the middle of the night:

It looks like G2R Ammo has been paying attention to anit-gun Congressional representatives who have been working to restrict magazine capacities and civilian ownership of firearms.

Leave it to America’s private sector entrepreneurs to always stay one step ahead.

With the RIP, one round should suffice.

We fully expect an outcry over this ammunition similar to the push back Winchester received when they released their Black Talon hollow point in the 1990’s. After pressure from anti-gun lobbies the company discontinued the Black Talon line.

G2R Ammo, however, designs the RIP exclusively, suggesting that they have no intention of following in Winchester’s footsteps.