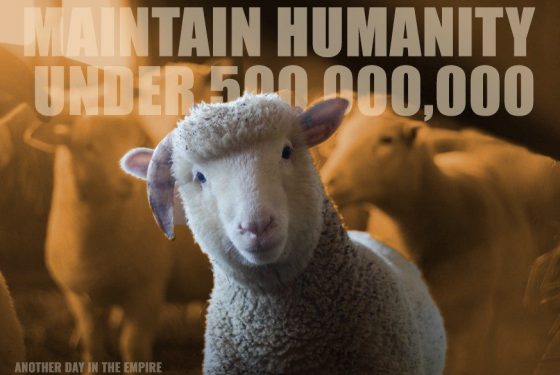 The latest episode of the highly polarizing and wholly manufactured Left vs. Right war of words and deeds—with a few Antifa and Proud Boys aggravated assaults thrown in—concerns our dystopian near-future.

Progressive political elites have decided that in order to save the environment, ordinary citizens must submit to radical lifestyle changes (while those same elites fly around the world on private jets and enrich themselves from trade with China, the world’s biggest polluter).

The reality may even be worse than the headline. Not only have progressive environmentalists suggested that we all switch to a diet of bugs instead of meat (especially steak, because cow farts produce carbon dontcha know), one Swedish scientist even suggested we devour the flesh of deceased humans to cut greenhouse emissions.

This followed an article published by Newsweek in which two psychologists mused on the human taboo against cannibalism, noting that “philosophers have argued that burying the dead could be wasteful in the context of the fight against world hunger.”

Cannibalism for the climate—that’s how far they’ve gone!

In addition, Bokhari mentions population control, carbon taxes, and other “dystopian cyberpunk nightmare(s),” all the fault, of course, of progressives, liberals, Democrats, that is to say, the ideological enemies of the “Dissident Right” over at Breitbart.

It’s true—on the left side of the artificial divide, it is gospel to believe we will all die in a mere twelve years due to “climate change” and if we don’t immediately adopt an Agenda 21 on steroids—now known as the Green New Deal—all of us will perish.

However, this is not merely a fever dream of the left, but a long-term plan by the ruling elite to turn humanity—reduced to 500 million worldwide—into bug- (and now human flesh) eating serfs.

The ruling elite—the financial and corporate class and what might be described as the “black nobility” (hereditary aristocracy)—are not liberals, progressives, the pussy-hat donned, but rather apolitical psychopaths ready to compromise and distort any political movement for their purpose, which is to get rid of a large chunk of the plebeian masses and herd the remainder into inner-city​ ghettos.

I covered this topic in a couple of videos produced for Newsbud.

If you doubt this, consider it a crazy conspiracy theory, take a look around. The middle class is evaporating, wealth is sucked into the coffers and offshore accounts of the mega-rich, homelessness is rising, war and rumors of war are constant, and the elite are buying islands and hideaways to escape the coming social breakdown.

It is not coincidental all of these things are happening now. It’s part of the plan to cull the herd—rising suicide, mental illness, unemployed millennials, offshoring and automation of decent jobs, the opioid crisis, millions on psychotropic drugs, staggering personal debt, new diseases, toxins and microplastics in the food chain, serious political division, and violence.

Meanwhile, the clueless, the brainwashed and politically regimented and indoctrinated on both the right and left continue to pointlessly fight among themselves while the hidden elite work behind the scenes, secretly mastering our destruction.

EDITOR’S NOTE: If you’d like to understand the root cause of the very vast majority of problems on Earth, please read the following book.

When someone looks out at the world and sees all manner of suffering and injustice, stretching back for thousands of years and continuing today, he invariably blames such problems on someone else’s hatred, greed, or stupidity. Rarely will someone consider the possibility that his own belief system is the cause of the pain and suffering he sees around him. But in most cases, it is. The root cause of most of society’s ills–the main source of man’s inhumanity to man–is neither malice nor negligence, but a mere superstition–an unquestioned assumption which has been accepted on faith by nearly everyone, of all ages, races, religions, education and income levels. If people were to recognize that one belief for what it is–an utterly irrational, self-contradictory, and horribly destructive myth–most of the violence, oppression, and injustice in the world would cease. But that will happen only when people dare to honestly and objectively re-examine their belief systems. “Most Dangerous Superstition

” exposes the myth for what it is, showing how nearly everyone, as a result of one particular unquestioned assumption, is directly contributing to violence and oppression without even realizing it. If you imagine yourself to be a compassionate, peace-loving, civilized human being, you must read this book.