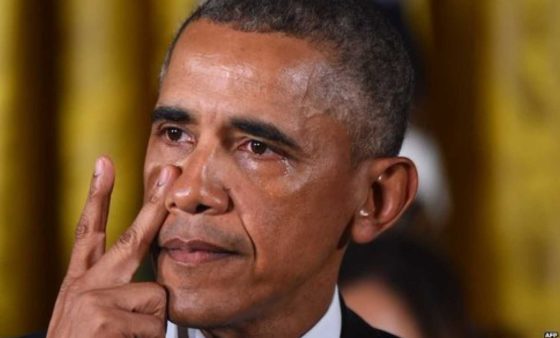 In the wake of the Sandy Hook elementary school shooting, many assumed then President Barack Obama’s tears were insincere; and it turns out, they were right.  Leaked emails prove the Obama White House was using emotional propaganda to brainwash the public into accepting the degradation of their human rights.

Propaganda isn’t new to politicians, but it’s nice to have confirmed what most of us already know: gun control is literally being pushed on us by using emotional brainwashing.  Obama advisers sought to “tap people’s emotions” for a huge gun-control push after the Sandy Hook shooting.

Rahm Emanuel famously said that “you never want a serious crisis to go to waste,” and apparently that included the 2012 Sandy Hook massacre. Two days after the horrific school shooting, the Chicago mayor advised then-Education Secretary Arne Duncan to “[t]ap peoples emotions” as they discussed how to leverage the tragedy to push for gun-control restrictions, according to emails published Wednesday by the Baltimore Post.

“What are your thoughts?” asked Duncan in an email with the subject line “CT shootings” dated Dec. 16, 2012. Emanuel advised him to move quickly. “Go for a vote this week asap before it fades,” he said. “Tap peoples emotion. Make it simple assault weapons.” Duncan replied, “Yup- thanks,” to which Mr. Emanuel responded, “When I did brady bill and assault weapons for Clinton we always made it simple. Criminals or war weapons.” –Washington Times

The 10-minute exchange came about two years after Emanuel, who served for five years as senior adviser to President Bill Clinton, left his post as White House chief of staff under President Barack Obama to enter the 2011 Chicago mayoral race.

This is simply more evidence of what we already knew: the easily manipulated have been being brainwashed by high-level politicians to accept their own disarmament and slavery. But it gets worse. As the emails progress, the two tyrants discuss how to create more buzzwords to further manipulate the emotionally weak and shape public opinion to push their dictatorial anti-gun agenda.

Duncan added: “Gun show loophole? Database? Cop-killer bullets? Too complicated?”Emanuel: “Cop killer maybe. The other no,” to which Duncan replied, “Got it.” –Washington Times

The emails were obtained through a Freedom of Information Act request submitted last summer to the Education Department, according to the Baltimore Post’s Ann Constantino.

Nicole and Josh Landers, the co-founders of the Parent2Parent Network in Baltimore County, said the email exchange “demonstrates a shocking political conspiracy to draw upon an agenda rather than focus on the murders of 20 school children and 6 educators from Sandy Hook.” Ms. Landers, who participated in last month’s roundtable discussion on school discipline with Betsy DeVos, has decried the 2014 federal guidance’s impact on school safety and the learning environment.“It appears that former Secretary Duncan was and is using the gun control platform to deflect from his failed educational policies which have negatively impacted nearly 51 million students and over 3 million teachers nationwide,” they said in a statement.

Humans have proven to be easily manipulated.  There are some in the United States that march around begging for the government to forcibly take away their fundamental human rights. As if that’s not disturbing enough, those same people were brainwashed by the politicians they trusted to accept their fate as a lesser human so the government can grow and exert even more power over them.  Unfortunately, there will be leftists who defend these actions unwilling to admit their very opinions were manipulated and decided for them.

It’s no longer a conspiracy theory, but a fact that people are being brainwashed using their emotions against them to accept a totalitarian agenda.

“It’s easier to fool people than to convince them that they have been fooled.” -Often attributed to Mark Twain, yet the original source is unknown for certain.