John McCain Is Pushing For War With Russia: “What Has Been Set Into Motion Is Still In Motion” 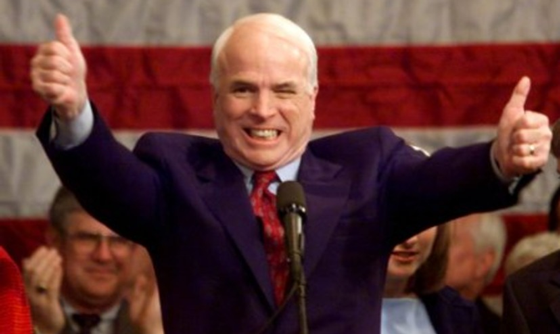 The “Founding Father” of Ukraine
Could only be Senator John McCain
As Civil War splits East and West
Johnny smiles and takes a breath
(A few brain cells short) …nonetheless,
His plans unfolding once again.

What has been set into motion is still in motion and coming around for a second lap.  The consortium of John McCain (the ringleader with the Soros connections), acted with the “authority” of Barack Hussein Obama II and “independently,” aided by Victoria Nuland (commissioned by Hillary Clinton, also acting on behalf of Soros) and Lindsay Graham (a ventriloquist dummy in the hands of McCain).  What a team!  Arseniy Yatsenuk quacked and chirped under orders, until it was determined that he was too weak.

Yatsenuk couldn’t stem the tide of fighting between the self-proclaimed autonomous Eastern districts of Ukraine and the Kiev government.  The IMF had offered to pay the Gazprom bill of $9 billion to Russia, and Ukraine was well on its way in 2014 to becoming a part of NATO and another IMF puppet of Europe.  The Separatists had other plans, though, and Russia aided them and offered to support them in the manner of South Ossetia in the Georgian War of 2005.

The IMF realized that Yatsenuk was not strong enough to hammer down the Separatists, and guarantee the enslavement with interest to pay the $9 billion.  The IMF realized that under Yatsenuk, perhaps the entire country would either revolt, be permanently split, or that the Russians might come in.  Soros had a vested interest in all of this: Soros wanted to purchase billions of dollars-worth of contracts, leases, and buy options for the paltry sum of $50 million.  US interests (and hence Soros’ interests indirectly) and those of the IMF were falling by the wayside.  The kicker was when Russia took Crimea after Crimea’s election (or invitation, if you prefer) …because they were not going to have Sevastopol and their Black Sea Fleet’s base yanked out from under their feet.

Yatsenuk (Yoda) was then demoted, and in came Petro “Willy Wonka” Poroshenko, chocolate magnate and multi-millionaire as Ukraine’s US and NATO Hegemony-Approved leader.  The problem here is that Poroshenko marched in step with the US interests; however, some of his measures created more problems for the US than was realized initially.  See, Poroshenko (indirectly through and with the help of Maidan) enforced a blockade on coal coming from the Eastern Provinces, the self-proclaimed republics of Donetsk and Lugansk.  Maidan was a Soros-supported and funded organization from the beginning…even before the ouster of Yanukovych, the duly-elected leader under the Constitution of Ukraine.

That coal blockade was a bad move that backfired and is affecting the US now.

Here is an article released by CNN on August 14, 2017 about a missile plant in Ukraine that bears reading:

“Washington (CNN)A US intelligence official knocked down claims that North Korea may have used illicit trade networks to purchase powerful rocket engines once produced by a Ukrainian factory that were instrumental to the Soviet missile program.

We have intelligence to suggest that North Korea is not reliant on imports of engines — instead, we judge they have the ability to produce the engines themselves,” the official told CNN on Tuesday in response to new analysis from the International Institute for Strategic Studies that was first reported by The New York Times on Monday.  Pyongyang’s mysteriously rapid development of an intercontinental ballistic missile — particularly after a string of failed intermediate-range flight tests in 2016 — has exceeded the expectations of US intelligence agencies, and evidence outlined in the global security think tank’s analysis suggested North Korea might be buying advanced propulsion technology for their Hwasong-14 and Hwasong-12 rockets from Russian or Ukrainian black markets.”

Of course, the US intelligence official “knocked down” the claims…the Poroshenko government is a creation of the US!  If they (the Ukrainians) had knowledge of this, they could implicate the US.  The significance of this is clear, and goes back even further to 2012 with more of a twist.  In that year (prior to the ouster of Yanukovych), this happened:

“This revelation [of potential North Koreans having Ukrainian rocket systems] comes via classified documents from US intelligence agencies and an analysis by Michael Elleman for the International Institute for Strategic Studies, in which he notes the “astounding strides” of North Korea’s missile program, including its upgrade from medium-range missiles to a Hwasong intermediate-range missile and ICBM in just two years’ time—which he says no other nation has ever done. Elleman says it seems Pyongyang was able to pull off this feat with a rocket engine based on Soviet RD-250 engines, which only a few Soviet plants made.

The state-owned Yuzhmash factory that’s being eyed is in Dnipro, a plant the Times describes as “awash in unpaid bills and low morale.” What Elleman says lends credence to his theory is that two North Koreans were busted six years ago trying to swipe data on these types of engines from there. The Yuzhmash website notes it “will not [participate] in any cooperation involving the transfer of potentially dangerous technologies outside Ukraine,” though Elleman doesn’t buy that. “It’s likely that these engines came from Ukraine—probably illicitly,” he tells the Times. “The big question is how many they have and whether the Ukrainians are helping them now. I’m very worried.” No one’s sure how the engines would’ve made it to North Korea, which the Times notes would indicate a “broad intelligence failure” on the part of all countries keeping an eye on Pyongyang”

If they were spying, there was no possible way, except through an ambassadorial position in the North Korean embassy to Ukraine that they were smuggling plans of missiles out of Ukraine.  North Koreans at a Kiev airport would have immediately come up under the Sesame Street “One of these things is not like the others” guidelines, and the plans would have been found and seized.  If they were spies, they undoubtedly sent out photos while infiltrating the site (when they took them).

No.  The Ukrainian government “backdated” the two North Koreans arrested for espionage charges and then fast-forwarded it to cover the lapse (unintentional or otherwise) in security under the Poroshenko government.

The key to all of this: the Kiev government (at the very least) caused all of this with the coal blockade.  There is an excellent article on the condition of the plant by Reuters and World News entitled Ukraine plant sucked into North Korea missile row has fallen on hard times, dated  August 18, 2017.  The article covers the low wages of the Eastern Ukrainian missile plant, formerly a Soviet missile factory.  Workers make less than $130 dollars a month and may only work one or two days in a month.

The coal blockade hurt everything economically, and as a result a situation arose where private citizens have been buying and selling on the black market.  The Obama administration turned a blind eye to what was happening.  Now the North Koreans appear to have advanced their missile program.  McCain has been pushing for war with Russia at every opportunity in this attempt to completely control Ukraine and turn it over to Soros to carry out his plans through NGO’s and shell-corporations for the deliberate looting of resources in Eastern Ukraine.

So why now?  Why is all of this being mentioned?  How about because of this, as released by Reuters World News on September 27, 2017:

“A military arms depot in Ukraine caught fire on Wednesday prompting more than 28,000 people in the Vynnystsya region to evacuate.   A video caught several explosions and rockets going off which could be seen for miles exploding over the countryside. The video is eerily similar to another Ukrainian arms depot that exploded in March of this year, officials determined that explosion to be an act of sabotage.   There is no indication this most recent arms depot was sabotaged but it is early to tell. Explosions at the munitions depot went on for hours, it is reported that 188,000 tons of munitions were stored there.”

Is this a legitimate accident?  Or is it the work of agents for the Kiev government trying to pin sabotage charges onto the Russians.  Is it a false flag attempt to get the war going over Eastern Ukraine between the US and Russia?

They already named a destroyer after McCain…the one that crashed into an oil tanker off Singapore last month.  McCain just destroyed the last chance for a repeal of Obamacare.  McCain has been behind the troop buildups in Eastern Europe.  Soon we’re going to send weapons to Ukraine (approved by Congress before Obama left office), and McCain was behind this action.  This man caused the coup in Ukraine and has been pushing the US toward war unrelentingly for the past several years.  Undoubtedly, he has been enriched by Soros and others: bought and paid for to continue his destructive actions…actions that will not be checked by anyone and that he will not be held accountable for.  Just business as usual, at the expense of the US and the American people…business that has enriched Senator John McCain.  The “Keystone Cops” of the FBI and the puppet American Congress will never reveal it…and are most likely tied into it, if not approving and enabling it outright.