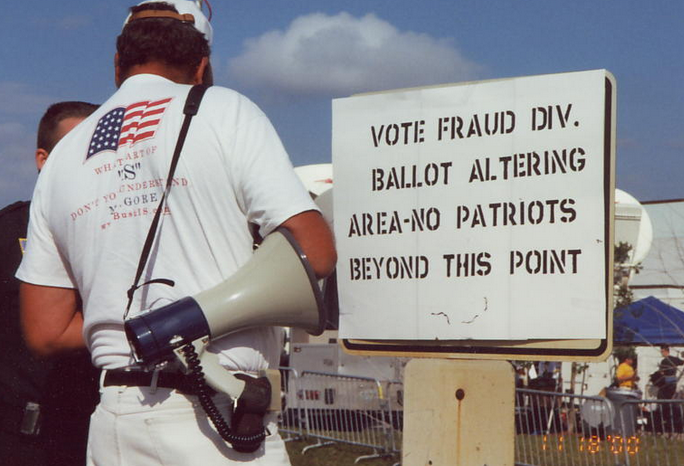 This article was written by Kurt Nimmo and originally published at BlackListedNews.com.

Editor’s Comment: According to Open Secrets, Green Party candidate Jill Stein only raised about $3.5 million over the course of her entire presidential campaign (as of reports dated Oct. 28, just 10 days before the election), yet she has now raised over $4.5 million AFTER the election ended i order to fuel recounts that she is pursuing in Wisconsin, Michigan and Pennsylvania – by coincidence, the three states that Hillary would need to pull a “win” after the fact if indeed recounts are done, and election results are altered. Stein received less than 1% of the vote in most states, and received no electoral votes, yet money is pouring into her campaign now. Gee… I wonder why?

More to the point, what would happen IF a recount changed the results of the election and the race was declared for Hillary after all? There was too much fraud and shadiness to suggest that Hillary ran any kind of legitimate campaign (clearly the DNC rigged the primaries to give her a red carpet), but no one would discount the importance of transparency, fair elections and verification. Theoretically, Hillary is something like 50,000 votes away (in those 3 key states)  from triumphing. Vote fraud is repugnant, and no one including Donald Trump should benefit from it.

Nonetheless, IF a scenario were to play out where Trump was stripped of the win, and Hillary instead took the Oval Office – and perhaps that is a big if, but it isn’t inconceivable – there is little doubt that a restless and angry population – confused and torn on all sides – would take to the streets. Civil unrest, riots, protests, and the response of martial law would appear to be inevitable. This country is unstable and poised for collapse. Stay vigilant… no one can say for sure what will come of this.

Clinton May Demand a Recount, Blame the Russians for Election Loss

Hillary Clinton and John Podesta are playing wait-and-see after a group of voting rights experts and computer security buffs claimed the election was hacked in favor of Donald Trump.

“Hillary Clinton could have been robbed of the presidency by hackers, a group of experts claims – and now they’re calling for her to demand a recount,” the Daily Mail reports.

The group says votes in Wisconsin, Michigan, and Pennsylvania may have been hacked to lower Clinton’s numbers. The experts believe she may have been robbed of around 30,000 votes.

On Tuesday New York magazine reported the group of “prominent computer scientists and election lawyers” described as activists had called for a recount.

The academics so far have only a circumstantial case that would require not just a recount but a forensic audit of voting machines. Also complicating matters, a senior Clinton adviser said, is that the White House, focused on a smooth transfer of power, does not want Clinton to challenge the election result.

The Russians and Vladimir Putin have yet to be directly accused, although this should be expected if Clinton demands a recount. A lot of effort went into the Democrat concocted propaganda campaign to portray Putin and Russia as meddlers determined to skew the election in Trump’s direction.

On November 9, Alexandra Chalupa, a DNC worker, went on Facebook to blame the Russians.

“Russians have heavily influenced this election for the past six months and have successfully hacked into the election systems of more than half the states in the country,” Chalupa wrote.

She also said the Department of Justice and the Department of Homeland Security “teamed up with a group that is part of Anonymous based in Washington, D.C. called ‘The Protectors.’ This group saw a lot of activity during Election Day from the Russians and believe that the voting results projected don’t match the internal and public polls because the voting results were manufactured in favor of Trump in heavily Republican counties in key states, and voting results may have been decreased for Clinton in key Democratic counties via malware that was placed by the Russians when they hacked the election systems of more than half our states.”

Zero evidence has been presented to back up the claim. Democrats began using the unsubstantiated claim when it became obvious Trump would pose a serious challenge. The establishment propaganda media now treats the accusation as fact.

In response to the unproven accusation, Obama considered tougher economic sanctions on Russia, revoking the diplomatic status of its envoys in the US, and deploying cyber weapons.

“It seems that where ever you turn nowadays, someone in Washington is issuing a threat against Russia. Are US-Russian relations really that bad, or does this trend have more to do with the defense industry and power struggles within the US?” writes Patrick Henningsen.

Moreover, the idea the Department of Justice and the Department of Homeland Security would cooperate with Anonymous is absurd. Or is it? Some say the shadowy hacker group works with the CIA to take down activist websites. If this is the case, cooperation between the DOJ, the DHS, and Anonymous would be a natural.

The move for a recount is picking up steam. On Wednesday Jill Stein, the Green Party candidate who received one percent of the vote, called for a recount.

“After a divisive and painful presidential race, reported hacks into voter and party databases and individual email accounts are causing many Americans to wonder if our election results are reliable. These concerns need to be investigated before the 2016 presidential election is certified. We deserve elections we can trust,” Stein said.

Stein did not directly blame the Russians, although NBC made sure to mention Russian hackers in a story on the failed presidential candidate’s call for a recount.

This article was written by Kurt Nimmo and originally published at BlackListedNews.com. Visit Kurt Nimmo’s website Another Day in the Empire and support his work.