This article was contributed by the Wealth Research Group.

This past Friday, I told my wife that I wanted to book a table for two this week at one of our favorite restaurants.

I went online to the booking app, punched 08:30 PM and the site showed a message that the restaurant was fully booked at that time slot. My initial thought was that it’s a popular day of the week (Thursday) and that it’s probably a busy hour too, so I researched this approximate time every day of the week and nothing was available.

This must be a software glitch I assumed, since the first slot was on April 13th! So, I called the restaurant and asked the hostess if she could find me a table for two next week and she reiterated that the restaurant was fully booked until mid-April in the evenings – no software glitch, just a lot of hungry diners!

Well, after that episode, I told my wife that I was going to go ahead and book one table a week until the end of April and called an additional four restaurants, where I was told the same thing: “We are packed.”

Households are sitting on massive savings and they’re going out, enjoying life, after one year of suffering for the greater good. On March 10th, 2021, the first time I sat at a restaurant since Sunday, March 8th, 2020, three days before the first national quarantine was announced and all restaurants closed up, it was bustling, with a queue of people outside on a waiting list.

The economy is booming (apparently) and though there might be pockets of exuberance and of bubble-like behavior, I’ve rarely felt more confident about the prospects of the human race than I do today.

I am as optimistic about the future as I’ve ever been in my adult life. In other words, I believe in our collective ability to overcome our present challenges. I’m not dismissing the crises that are occurring; I fully acknowledge them and have faith that they’ll soon be gone, replaced with bigger and more complex ones because progress is happening fast. 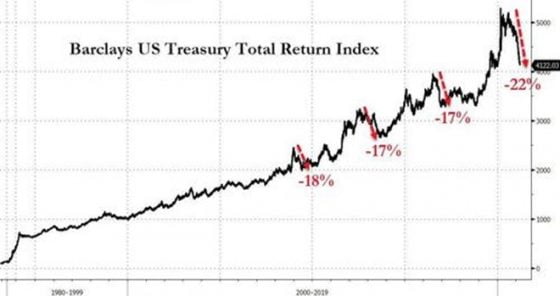 I’ve been saying for months that the reset has already occurred and that we’re in the new world, with new rules and massive new opportunities and I believe the greatest example of this is that the 37-year bull market in bonds (lower yields since 1982) is officially over.

Contrary to the current market sentiment, which is to be super-scared about inflation at high levels, we just don’t see that as the most likely scenario.

Our view of the future is that real growth is happening, supported by major demographic trends that are actually positive and that would push interest rates above the artificially-low rates we’ve seen in the past decade, but not above the normalized range of 3% to 4%.

As much as Jerome Powell is attempting to explain this to the investing community, they’re still hyper-worried about runaway inflation. How can governments print so much and run such giant deficits, without the result being that of inflation is the classic argument.

This can be seen below: 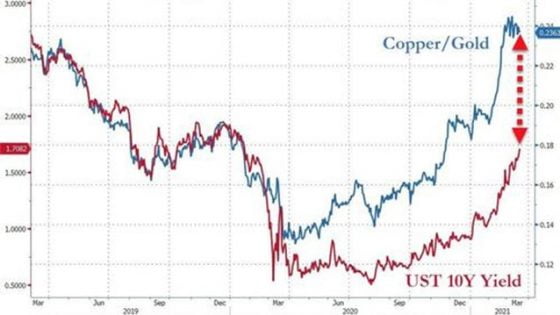 Once the world is convinced that we’re not in a 1970s inflationary nightmare environment or a Weimer Republic situation, the consensus will flip back to the one that Powell is explaining the FED is executing – which is that they’re not raising rates or tapering, just letting the free forces of the economy work naturally.

Counterintuitively, gold is smacked and hated right now, because everyone believes that we will soon see rates hikes.

Gold reacts bearishly to the idea of higher real rates, while Bitcoin is reacting positively and our LONG position on it is one of the greatest calls we’ve ever made.

In other words, if the inflation-scare continues, as I believe it will until late May or early June, when the next FED meeting might finally offer reassurance that the market will buy into, Bitcoin could soar, while stocks and gold get clobbered.

If between now and then, it dawns on people that they’re overly worried about tightening and tapering, gold and stocks will find their ultimate bottoms for the bond-yields-fear cycle and we’ll begin to see where buyers and sellers find common ground.

Jerome, let the free markets work, even if we go through birth pains — we’re all big boys here and can handle the short-term volatility in order to undergo genuine price discovery.