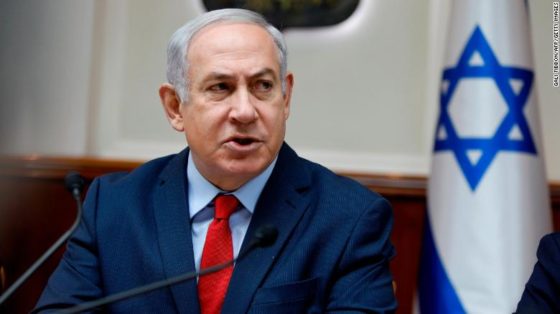 In a stunning turn of events that has thrown Israel into a state of chaos, Israeli police revealed Tuesday that they believe that Prime Minister Benjamin Netanyahu should be charged in multiple corruption cases that involved alleged bribery of media outlets and others the powerful politician sought to control.

The police recommendation came in a statement that claimed that Netanyahu should be charged with bribery, fraud, and breach of trust after a yearlong graft investigation that concluded Tuesday with clear evidence of gifts-for-favors.

All together, Netanyahu is accused of accepting $300,000 in gifts over 10 years, including back-room dealings with an influential newspaper publisher that the prime minister sought to ensure more favorable coverage from.

Concluding a yearlong graft investigation, the police recommended that Mr. Netanyahu face prosecution in two corruption cases: a gifts-for-favors affair known as Case 1000, and a second scandal, called Case 2000, in which Mr. Netanyahu is suspected of back-room dealings with Arnon Mozes, publisher of the popular newspaper Yediot Aharonot, to ensure more favorable coverage.

All told, the police accused Mr. Netanyahu of accepting nearly $300,000 in gifts over 10 years.

Mr. Netanyahu, addressing the nation live on television shortly before the police released their findings around 9 p.m., made clear that he would not step down. “I feel a deep obligation to continue to lead Israel in a way that will ensure our future,” he said, before embarking on a 12-minute defense of his conduct.

The police recommendations must now be examined by state prosecutors and the attorney general, Avichai Mandelblit. The final decision about whether to file formal charges lies with Mr. Mandelblit and is subject to a hearing beforehand with Mr. Netanyahu’s lawyers. Reaching that threshold alone could easily take months.

While the charges against Netanyahu seem clear cut, one can imagine that he, along with his numerous allies throughout Israel and the United States, will attempt to claim that they are nothing more than an attack on the Jewish people as a whole, a tactic that Mr. Netanyahu has perfected throughout the last decade.

What do you think? Is this a political hit job against the Israeli Prime Minister or is this actual evidence of widespread corruption carried out by both Netanyahu and his political allies?