Israel Defense Forces: ‘We Have Enough Bullets For EVERYONE’ 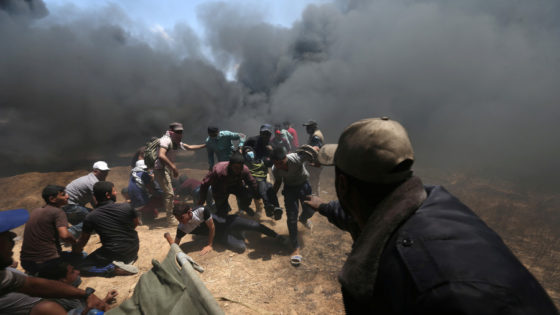 Israel Defense Forces (IDF) has declared that they have got enough bullets for everyone and they’ve proven it.  At least 60 Palestinians, including children, were killed by Israeli gunfire on Monday during protests over the United States embassy in Jerusalem.

The clashes Monday were violent and dozens lost their lives.  Avi Dichter, a senior member of Benjamin Netanyahu’s ruling Likud Party, made the highly controversial comment when speaking to Hadashot TV news on Monday afternoon of the violence taking place between Israel and the Palestinians.

Dichter, who is also the former director of Shin Bet internal security service and Minister of Internal Security was quoted as saying, “The IDF has enough bullets for everyone,”  by The Times of Israel. “I think that ultimately, the [sic] means that the IDF prepared, whether non-lethal or if needed, lethal, in cases where it’s justified by the open-fire regulations — there’s enough ammunition for everyone.”

Making sure to say it twice, Dichter wants those opposing Israel to be aware of the fact that they’ve stored and will use ammunition to squash the violent clashes. According to RT, the politician, who currently serves as a chair of the Foreign Affairs and Defense Committee in the Knesset claimed that the IDF “won’t let anyone put soldiers, and certainly not civilians, in danger.”

At least 60 Palestinian protesters, including seven children, were killed by Israeli gunfire during demonstrations on the day of the US Embassy’s inauguration in Jerusalem, according to the latest data from the Palestinian Health Ministry. More than 2,400 protesters were injured in what is considered the most violent day of the six-week-long Great March of Return. Monday was also the deadliest day in Gaza since the start of the 2014 war.

Amnesty International called the situation in Gaza “another horrific example of the Israeli military using excessive force and live ammunition in a totally deplorable way.” A United Nations committee also called on Israel to stop using “disproportionate force” against demonstrators.

We are witnessing an abhorrent violation of international law & human rights in #Gaza. 38 confirmed dead, including 6 children, with close to 2000 people injured. Many are reporting injuries to the head and chest. Over 500 injured with live ammunition. This must end immediately.

Over the six weeks, tens of thousands of Palestinians have gathered at the border fence with Israel to demonstrate. While demonstrations have been mostly peaceful, some Palestinians burned tires and threw stones at Israeli soldiers, prompting a heavy-handed response.