‘Isolated’ From 99%, Rich Seek Wealth Therapy: “Not Comparing to What People of Color Go Through, But…” 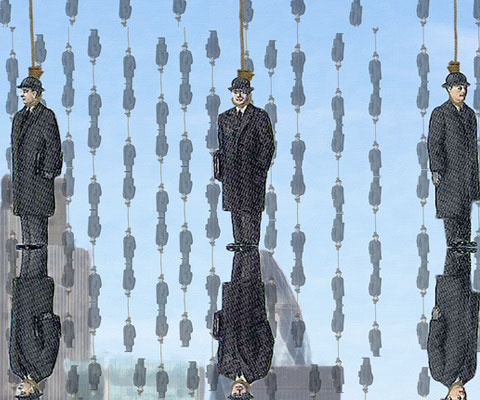 Apparently, the ultra-wealthy feel corned, isolated and the need hide from the rest of us. Perhaps that is why many of them are investing in luxury hideouts and even elaborate superyachts with submarine escape pods – just in case.

The Occupy movement may have faded into obscurity, but the elite power brokers who manage the planet have apparently not forgotten the anger against those in charge that it represented.

With millions struggling to find a decent job, facing foreclosure and up to their necks in debt, there are plenty of reasons that ordinary Americans feel resentment towards the few who are (perhaps deliberately) multiplying their wealth off the suffering of the many.

Hence, an emerging niche for “wealth therapy” – where psychologists and life coaches listen to the concerns of those who feel the need to hide their wealth in public and can only trust those they think don’t want their money:

What issues are America’s 1% struggling with? There is guilt over being rich in the first place, he said. There is the feeling that they have to hide the fact that they are rich. And then there is the isolation – being in the 1%, it turns out, can be lonely.

“Wealth can be a barrier to connecting with other people,” confessed a spouse of a tech entrepreneur who made about $80m.

“We talk about it as stealth wealth. There are a lot of people that are hiding their wealth because they are concerned about negative judgment,” said Traeger-Muney.

“We are trained to have empathy, no judgment and so many of the uber wealthy – the 1% of the 1% – they feel that their problems are really not problems. But they are. A lot of therapists do not give enough weight to their issues.”

It sounds ridiculous, yet it is apparently a common concern among those in the upper crust.

When times turn tough for the general population, those at the top feel that it is “easy to scapegoat the rich,” and many of those with fortunes carry the additional burden of the problems that come with the way people perceive them.

Think you’d like to have those kind of problems? Maybe so, but many of the rich experience isolation, difficulties relating to regular people, and feel guilt and anxiety about their bank accounts, how they got their money, and how it will be passed on to the next generation:

“Wealth can be a barrier to connecting with other people,” confessed a spouse of a tech entrepreneur who made about $80m.

“We talk about it as stealth wealth. There are a lot of people that are hiding their wealth because they are concerned about negative judgment,” said Traeger-Muney.

“It’s really isolating to have a lot of money. It can be scary – people’s reaction to you,” said Barbara Nusbaum, an expert in money psychology.

This mentality makes many wealthy people somewhat “miserable” – there was even a study done on it – fittingly – by the Bill & Melinda Gates Foundation:

According to an article in The Atlantic, “the respondents turn out to be a generally dissatisfied lot, whose money has contributed to deep anxieties involving love, work, and family. Indeed, they are frequently dissatisfied even with their sizable fortunes. Most of them still do not consider themselves financially secure; for that, they say, they would require on average one-quarter more wealth than they currently possess.”

The rich have even gone so far as to compare their suffering to that of other minorities in society.

And using politically-correct doublespeak, they can even become persecuted victims:

“Sometimes I am shocked by things that people say. If you substitute in the word Jewish or black, you would never say something like that. You’d never say – spoiled rotten or you would never refer to another group of people in the way that it seems perfectly normal to refer to wealth holders.”

As one psychological counsellor to the 1% says: ‘I am not necessarily comparing it to what people of color have to go through, but …’

“Coming out to people about their wealth is similar to coming out of the closet as gay. There’s a feeling of being exposed and dealing with judgment.”

“You can come up with lot of words and sayings about inheritors, not one of them is positive: spoiled brat, born with a silver spoon in their mouth, trust fund babies, all these things,” she said, adding that it’s “easy to scapegoat the rich”.

Talk about first world problems. Therapists, though, insist that rich clients have valid problems with the way their money is treated… you must respect them, regardless of how they got it.