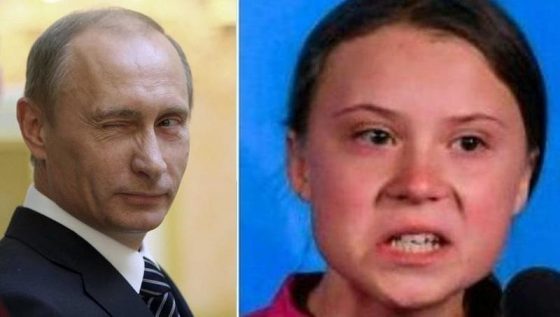 Russian President Vladimir Putin may have openly shamed 16-year-old environmental activist Greta Thunberg in early October for selectively guilting everyone except China over pollution, but one German politician has suggested the Kremlin may have actually “financed and steered” her eco-movement.

In a letter to the European Commission, Alternative for Deutschland (AfD) MEP Jörg Meuthen questioned the measures Europe has taken to “avert hybrid threats” that may “influence decision-making, to weaken societies and undermine unity.”

Meuthen then points to several campaigns, such as Thunberg’s “Fridays for Future” school protest movement, along with those by Greenpeace and NGO rescue boats in the Mediterranean. He then inquires whether the EU has investigated said campaigns and if so, he would like to know what they have concluded.

And lastly, he asks if the Commission can “rule out the possibility that these campaigns are being financed and steered by Russia.”

Shirley, you must be joking…

If Thunberg is a Putin puppet, he must have clearly been drumming up sympathy for the autistic eco-avenger. After she shamed the UN earlier this month for “ruining her childhood,” Putin shamed her back – saying “Sure, Greta is kind, but emotions should not control this issue.”

Swedish climate activist Greta Thunberg at #UNGA: "This is all wrong…You all come to us young people for hope. How dare you! You have stolen my dreams and my childhood with your empty words—and yet, I'm one of the lucky ones." https://t.co/YTVSvKxTkg pic.twitter.com/px90HghuQd

“Go and explain to developing countries why they should continue living in poverty and not be like Sweden,” he added, before saying that it was deplorable how some groups are using Thunberg to achieve their own goals.

In Joseph E. Postma’s book, The Layman’s Guide to the Greatest Scientific Fraud in History

, You’re going to learn about the greatest fraud which has ever, and which could ever, occur in science. The audacity of the fraud is matched only by its simplicity. The amazing thing is that anyone, down to Kindergarten children, can see the fraud and appreciate it as a fraud, while almost no scientist, particularly physicists at universities, cannot and refuse to. This book will give you all of the information that you need to debunk what is now the single greatest political and scientific fraud in history. It doesn’t matter what else the other side tries to plead, it doesn’t matter what “data” they emotionally believe themselves to be referring to – absolutely nothing that they say about their ploy will be taken seriously any longer. This book debunks their narrative at step one, and everything else they say afterward is junk pseudoscience.