Is Another War Brewing In The Middle East? Saudi Arabia Gives 24 Hour Ultimatum To Qatar 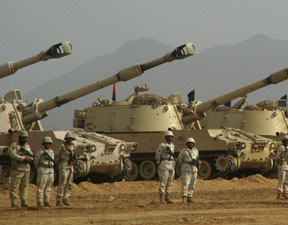 What’s going down in the Middle East right now is the perfect example of a black swan event. Out of nowhere, Saudi Arabia, Bahrain, UAE, Egypt, Yemen, and the Maldives cut off diplomatic relations with the nation of Qatar several days ago. Saudi Arabia and the UAE (who are leading the charge against Qatar) have since placed a naval blockade on Qatar, and have cut air and land links with the nation as well.

Keep in mind that Qatar is a fairly small nation, surrounded by larger neighbors that are basically threatening to completely cut them off from the rest of the world if they don’t comply with their demands, which are to cut ties with Iran, as well as radical organizations like the Muslim Brotherhood and Hamas. The blockade is so serious, that the residents of Qatar have been stripping grocery stores bare in anticipation of food shortages.

And on top of that, Saudi Arabia has just issued an ultimatum to Qatar, with conditions that the nation must comply with over the next 24 hours if they want diplomatic relations to normalize. According to a journalist with Al-Jazeera, the demands include the following:

In any case, Saudi Arabia hasn’t said what the consequences would be if Qatar doesn’t abide by these demands, but those consequences could be dire.

Analyst Giorgio Cafiero of Gulf State Analytics, a geopolitical risk consultancy based in Washington, DC, told Al Jazeera: “I think the Kuwaitis as well as Omanis … fear the prospects of these tensions escalating in ways which could undermine the interest of all six members of the GCC.

“There are many analysts who believe that a potential break-up of the GCC [Gulf Cooperation Council] has to be considered right now.”

He added that if tension escalates, some have warned of a “military confrontation”.

“If these countries fail to resolve their issues and such tensions reaches new heights, we have to be very open to the possibility of these six Arab countries no longer being able to unite under the banner of one council,” said Cafiero.

So basically, over the course of three days, Qatar’s oil rich neighbors went from begrudgingly accepting their foreign policy decisions and living in peace with them, to placing a blockade on all of their sovereign borders. It’s been three days, and now the potential for war between the Gulf oil states and Qatar has drastically increased.

Is it any wonder why the Middle East has such a terrible reputation for instability? Even one of their wealthiest and most stable nations is staring down the barrel of a gun.

The Reality Of Saudi Arabia Going To War: “They Will Lose 50% Of Their Forces In The First Engagement”

The Life and Times of the Thanksgiving Turkey: He Never Saw It Coming

Saudis and the Dying Petrodollar: “The Global Economic Rest Has Begun”