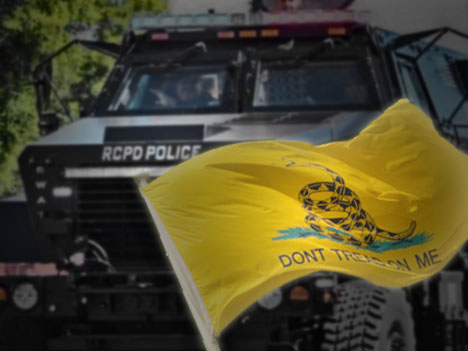 It could happen at any time.

At least that’s what many experts think.

There are gross violations of the Constitution and the rights of the people at every turn. It is a daily staple of the news cycle. There have been potential flashpoints on the scale of Lexington Green (which started the American revolution in 1775) over and over again.

And people have never been so divided at any time in the collective memory.

Between threats of gun confiscation at the federal level, and repeated incidences of SWAT teams and military-like police forces abusing their power against people in their homes and at protests, there are many reasons to think things have gone too far. The PATRIOT Act, the NDAA, the TSA and Homeland Security all represent the occupation of the American people and the complete destruction of civil liberties.

Will something spark a revolution or a civil war, or will the powers that be lose the ability to pit people against each other?

Oath Keepers founder Stewart Rhodes said (in the video above):

“If we defend it together, we can avoid bloodshed here at home. But if we allow our police to militarize and turn into an occupying army, or we allow our military to be used here at home domestically against the people, there will be another fight. And there should be.”

As Rhodes notes, many law enforcement officials have spoken out about the unconstitutional acts of this government, and have indicated that they will stand with the people. This is the best outcome, but not the only one that may happen.

Even at the top of the system, there are many who have rebelled and dissented against the unconstitutional and delusional acts of the sitting president. How much more can the system bear before it cracks at the foundation?

Award winning democrat Seymour Hersh revealed the US military was defying the White House and the CIA by providing intelligence to Syria against ISIS. While Obama is expected to move against guns in the next few days (another “conspiracy theory” coming true) it is good to put this issue into perspective and to point out the obvious red line of the US public on this issue. The system is disintegrating at the seams and with the US military revolting against the executive branch a civil war can start at any moment.

When the founders finally declared independence, it came with a well-thought out list of the many times when the British occupiers went too far in abusing the rights of the colonists, and it formed the basis of the fight for freedom.

While not all of abuses listed in the Declaration of Independence still apply today, many do. Read them for yourself and see if it applies to the corruption in Washington today:

How many more abuses will the people take before they fight back? Will those in power back off if people refuse to cooperate any longer? Or will this country roll over and descend into full-blown tyranny like so many others before it?