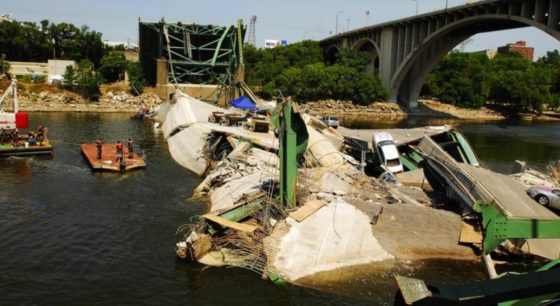 Last week, President Trump announced his proposal for a $1.5 trillion infrastructure program in his State of The Union address to the American people. He failed to mention that over the next decade, the federal government would provide very little money whatsoever for America’s crumbling bridges, rails, roads, and waterways.

Trump’s plan counts on state and local governments working in tandem with private investors to fork up the cash for projects.

In overhauling the nation’s crumbling infrastructure, the federal government is only willing to pledge $200 billion in federal money over the next decade, leaving the remainder of $1.3 trillion for cities, states, and private companies.

Precisely how Trump’s infrastructure program would work remains somewhat of a mystery after his Tuesday night speech, as state transportation officials warned that significant hikes to taxes, fees, and tolls would be required by local governments to fund such projects.

To get an understanding of the severity of America’s crumbling infrastructure. The American Road & Transportation Builders Association (ARTBA) has recently published a shocking report specifying more than 50,000 bridges across the country are rated “structurally deficient”.

The roads and sidewalks, airports and bridges, are perfect in Dubai. Everything looks clean & strong. In U.S., everything is falling apart!

If the “structurally deficient” bridges were placed end-to-end, they would stretch 1,216 miles or nearly the distance between Miami and New York City, said ARTBA. Cars, trucks, and school buses cross these 54,259 compromised structures more than 175 million times per day, which it is only a matter of time before another Mississippi River Bridge collapse occurs.

Here are the highlights from the report:

Dr. Alison Premo Black, chief economist for the American Road & Transportation Builders Association (ARTBA), who conducted the analysis, said, “the pace of improving the nation’s inventory of structurally deficient bridges slowed this past year. It’s down only two-tenths of a percent from the number reported in the government’s 2016 data. At current pace of repair or replacement, it would take 37 years to remedy all of them.”

Black says, “An infrastructure package aimed at modernizing the Interstate System would have both short- and long-term positive effects on the U.S. economy.”

She adds that traffic jams cost the trucking industry $60 billion in 2017 in lost productivity and fuel, which “increases the cost of everything we make, buy or export.”

Other key findings in the ARTBA report:

As Staista’s Niall McCarthy notes, U.S. drivers cross those bridges 174 million times a day and on average, a structurally deficient bridge is 67 years old. Dr. Alison Premo Black carried out the analysis for the ARTBA and she has said that if things continue at their current pace, it would take 37 years to repair all of the bridges that need attention. With a total of 5,067 of them, Iowa has the most structurally deficient bridges, followed by Pennsylvania (4,174) and Oklahoma (3,234).

You will find more statistics at Statista

Here are the most traveled “structurally deficient” U.S. bridges in 2017:

In 2007, the I-35W Mississippi River Bridge in Minneapolis collapsed during an evening rush hour commute, sending cars and trucks diving into the river. Thirteen people were killed and 145 were injured. The incident served as an eye opener to America’s deteriorating infrastructure. Ten years later, not much progress has been made in America’s bridges.

President Trump has undoubtedly over-hyped his proposal for a $1.5 trillion infrastructure program, but for the 50,000 “structurally deficient” bridges across America, it is a race against time for the Trump administration, before the next bridge collapses triggers a mass causality event. We are almost positive this administration does not want this on their plate.

“Every federal dollar should be leveraged by partnering with state and local governments and — where appropriate — tapping into private sector investment to permanently fix the infrastructure deficit,” Mr. Trump said in his State of the Union address.