While the NSA, FBI and other intelligence agencies mine and collect trillions of domestic electronic interactions of every American citizen, a large portion of the population simply assumes that nothing will ever come of it. “If I’m not doing anything wrong,” they say, “then who cares?”

True. Today you can go out, join a protest, scream to your heart’s content at Occupy and Tea Party assemblies, and under the First Amendment you are free to go about your business once done. You can insult politicians. You can discuss ‘conspiracy theories’ with your friends. You can post to forums, blogs and social networks and be totally immune from state-sponsored persecution and prosecution based on your beliefs and ideologies.

All the while, the government is cataloging your every interaction – who you’ve spoken with, where you’ve been, you’re political inclinations, religious beliefs, and your purchasing habits.

The data, for all intents and purposes, isn’t being used for any real overt purpose right here and now.

But as we’ve seen throughout history, governments change, as do the legalities of certain activities.

This week the U.S. Fifth Circuit court issued a ruling allowing the government to capture cell phone data without a warrant.

Ruling 2 to 1, the court said a warrantless search was “not per se unconstitutional” because location data was “clearly a business record” and therefore not protected by the Fourth Amendment.

At first glance, this may seem like no big deal, but as Karl Denninger explains, it may have serious life altering implications – not today, or tomorrow, but perhaps five years or a decade down the road.

That is, exactly what the NSA is grabbing from all cell carriers in bulk without a warrant.

“In bulk” means for everyone.

The root of the problem here is not that it might lead to you “right now.”  It’s that the data, once acquired is never erased and thus becomes a record that can be used at any time in the future if it becomes politically (or otherwise) expedient to use in order to implicate you in something.

The usual argument on the other side is something along the lines of “I’m not doing anything wrong so I don’t care.”  Uh huh.

You’re a rather trusting sort, you know.  After all, there is no evidence that the government would ever turn into something evil at any time in your lifetime and then use that data to ex-post-facto link you to something they don’t like — right?

There’s no history of governments doing things like this, is there?  Oh wait — there is.  There are in fact dozens of such instances through history, and in virtually every single case the citizens who were ultimately murdered as a consequence never saw it coming 5, 10 or 20 years down the road because at the time they “consented” the evil thing wasn’t happening — yet.

The most-obvious of course is the Jews in Nazi Germany, but by no means the only example.  Indeed, the history when it comes to privately-owned arms is that material and serious constraints on their personal ownership tend to come 10 or 20 years before the citizens are murdered by their very own government.

This is much-more-insideous in that these “records” can be — and will be — used to link you to a political protest (e.g. “you were at the Washington Mall during the time that xxxx happened”) and while today that’s considered a protected activity who says it will be tomorrow?

The real error here is that “business records” are not accorded 4th Amendment protections.  Why not?  I give the cell company access to my location not because I want them to have it but because it is necessary for their systems to know where I am for the service I am contracting for to work.

The very premise under which the court ruled is incorrect — if you and I agree that you may have some piece of information for the purpose of providing me a service or good that does not mean that I am giving you license to use it for whatever other purpose you may cook up later on.

If we cannot get our government to respect the fact that private citizens and private companies have the right to allocate information for specific purposes and that doing so does not give a general level of permission to either entity to then use that data outside of the specific purpose for which it was negotiated then we need a new government that does respect that fact.

Why do you think they’re collecting this data and investing hundreds of billions of dollars into massive NSA data centers where they can store, process and cross reference this data? These aren’t just shovel-ready Obama jobs to boost the economy.

There is a plan in place, and one day all of this data will be utilized by the government. And as we know, it’s never for the benefit of the people.

Everything you do right now is being monitored, and one day soon they’re going to use that data against you.

Let’s just hope the penalties for future violations based on past transgressions don’t come in the form of being lined up against a wall. 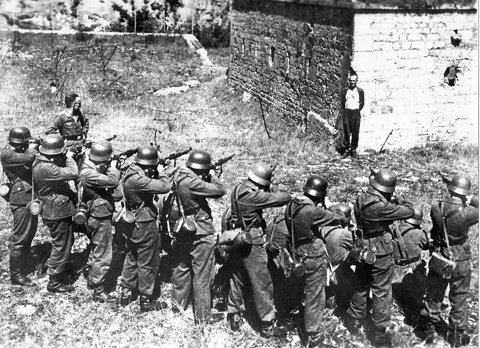 Of course, such things can’t possibly happen in the “modern” world, so we have nothing to worry about.