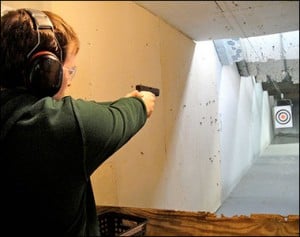 Illinois Senate President John Cullerton will reportedly introduce a draconian bill today in the Illinois legislature that will effectively ban all modern firearms, criminalize their owners, and subject their guns to confiscation by the Illinois State Police.

The proposed outlawing of firearms was confirmed by the NRA’s Illinois rep, according to Robert Farago, writing for The Truth About Guns website.

From the Illinois State Rifle Association:

Based on what we know about Cullerton’s bill, firearms that would be banned include all semiautomatic rifles, pistols, and shotguns. Pump action shotguns would be banned as well.

This would be a very comprehensive ban that would include not only so-called ‘assault weapons’ but also such classics as M1 Garands and 1911-based pistols. There would be no exemptions and no grandfathering. You would have a very short window to turn in your guns to the State Police to avoid prosecution.

Folks monitoring the effort to disembowel the Second Amendment in the Land of Lincoln say the bill has a 50-50 chance of passage. They advise gun owners both in and out-of-state to call Senate President Cullerton at 217-782-2000 and contact state representatives at ilga.gov.

In addition to outlawing a large number of firearms, the legislation will target shooting ranges in the state. “Not only are they going after semi-autos and magazines, but they are going after ranges,” the Illinois Carry website reports.

In November, we reported on Illinois governor Pat Quinn’s attempt to circumvent the legislature and impose an assault weapons ban. State Sen. Dave Luechtefeld, a Republican from Okawville, led an override that defeated the governor.

In early December, gun grabbers in the state were dealt a setback when the U.S. Seventh Circuit Court of Appeals ruled the state’s ban on carrying a weapon in public is unconstitutional.

“We are disinclined to engage in another round of historical analysis to determine whether eighteenth-century America understood the Second Amendment to include a right to bear guns outside the home. The Supreme Court has decided that the amendment confers a right to bear arms for self-defense, which is as important outside the home as inside,” the court ruled.