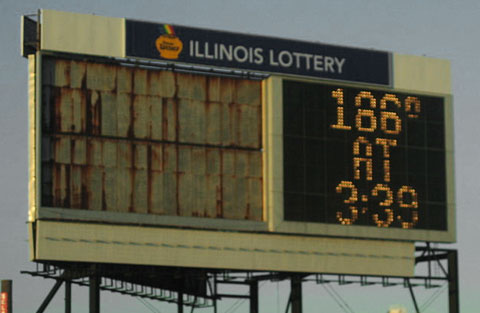 Editor’s Comment: You know things are bad when they stop paying lottery winners – whose winnings represent a small amount of the total cash hauled in by people spending extra in hopes of winning. But in Chicago, pensions have been swindled and traded against the debt, leveraged on the market and held by the state only in a theoretical location that may or may not make it to the desperate pockets of retirees.

The game is rigged, and the State of Illinois is only one of the worst places leading the way in budget crises across the country and globe so deep that an emergency resolution is all but guaranteed. Who will get their share of money from investments and savings accounts mismanaged by these crumbling entities? The answer is basically a game of musical chairs, and many are likely to be left standing and out of luck, while the taxpayers everywhere will be dealt further crippling costs to support governments who are less responsible than the average citizen.

Pardon the pun, but there is obviously no pot of gold at the end of this dark rainbow.

Much as Brazil is the poster child for the great EM unwind unfolding across emerging economies from LatAm to AsiaPac, Illinois is in many ways the mascot for America’s state and local government fiscal crisis.

Although well documented before, the state’s financial troubles were thrown into sharp relief in May when, on the heels of a state Supreme Court ruling that struck down a pension reform bid, Moody’s downgraded the city of Chicago to junk.

Since then, there’s been quite a bit written about the state’s pension problem and indeed, Reuters ran a special report earlier this month that outlined the labyrinthine, incestuous character of the state’s various state and local governments.

On Friday, in the latest sign that Illinois’ budget crisis has deepened, Governor Bruce Rauner apparently fired “superstar” budget guru and Laffer disciple Donna Arduin who had been making some $30,000 a month as an economic consultant.

And while Illinois apparently found the cash to fork over six figures to Arduin for just four months of “work”, the budget stalemate means hard times for Illinoisans – including, apparently, lottery winners. The Chicago Tribune has more:

After years of struggling financially, Susan Rick thought things were looking up when her boyfriend won $250,000 from the Illinois Lottery last month. She could stop working seven days a week, maybe fix up the house and take a trip to Minnesota to visit her daughter.

But because Illinois lawmakers have not passed a budget, she and her boyfriend, Danny Chasteen, got an IOU from the lottery instead.

“For the first time, we were finally gonna get a break,” said Rick, who lives in Oglesby. “And now the Illinois Lottery has kind of messed everything up.”

Under state law, the state comptroller must cut the checks for lottery winnings of more than $25,000.

And lottery officials said that because lawmakers have yet to pass a budget, the comptroller’s office does not have legal authority to release the funds.

Prizes of $25,000 or less will still be paid at lottery claim centers across the state, and people who win $600 or less can cash in their ticket at the place where they bought it.

But the bigger winners? Out of luck, for now.

While lottery officials could not immediately say how many winners’ payments were delayed or provide the total amount of those payoffs, the agency’s website lists multiple press releases for winners since the current fiscal year began July 1. Including Chasteen, those winners represent millions of dollars in prizes.

“The lottery is a state agency like many others, and we’re obviously affected by the budget situation,” Illinois Lottery spokesman Steve Rossi said. “Since the legal authority is not there for the comptroller to disburse payments, those payments are delayed.”

Generally speaking, this just serves to underscore the extent to which gross fiscal mismanagement along with the perceived inviolability of pension “implicit contracts” is pushing Illinois further into the financial abyss, but what’s particularly interesting about the suspension of lottery payouts is that the state is now effectively in default to its own citizens, something which, if the situation were reversed, would not be tolerated, and on that note, we give the last word to Rick (quoted above) and also to State Rep. Jack Franks:

Rick: “You know what’s funny? If we owed the state money, they’d come take it and they don’t care whether we have a roof over our head. Our budget wouldn’t be a factor. You can’t say (to the state), ‘Can you wait until I get my budget under control?'”

Franks: “Our government is committing a fraud on the taxpayers, because we’re holding ourselves out as selling a good, and we’re not — we’re not selling anything. The lottery is a contract: I pay my money, and if I win, you’re obligated to pay me and you have to pay me timely. It doesn’t say if you have money or when you have money.”