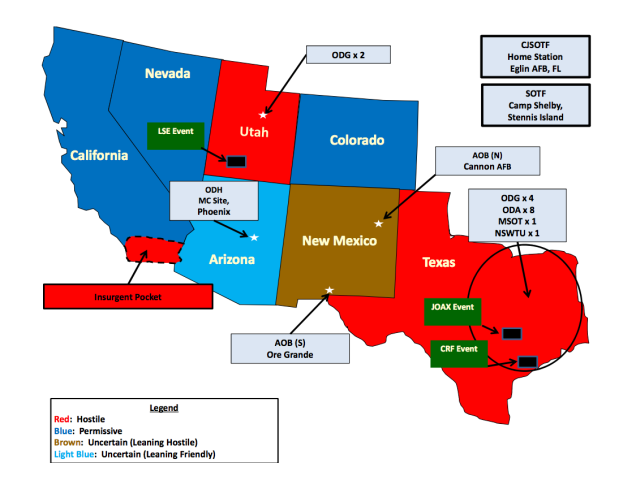 This article was graciously contributed by Michael Snyder and originally published at his End of the American Dream blog.

Editor’s Note: We all know what would happen – or think we know what would happen under this scenario. Any emergency that encompasses martial law can range from bad to nightmarish. The growing concern with the Jade Helm 15 martial law exercises, which will take place over the course of months and focus on ‘hostile’ states in the southwest, is that such a response is becoming inevitable.

Practice makes perfect, and this kind of training does make this kind of real life response from the feds and military plausible and perhaps likely. Even if the cover excuse – that our troops are training to take on foreign enemies and not perceived domestic ones – holds true, the personnel involved are learning that this is way to get things done. This exercise takes from the same playbook that many other martial law exercises have in the past, only this time the scale is bigger than ever before. Despite what all red-blooded, patriotic Americans would like to believe – it could happen here.

What Would Happen If Martial Law Was Declared In America?

In recent weeks, there has been a lot of concern that an upcoming eight week military exercise on U.S. soil known as “Jade Helm” is actually a dress rehearsal for the imposition of martial law in this country.  One of the reasons for the high level of concern is that we have seen a dramatic increase in the number of “urban warfare exercises” conducted by the U.S. military in major U.S. cities over the past decade – including exercises where “dissidents” are hunted down, arrested and hauled away.  As our world becomes increasingly unstable, and as our society rapidly decays from within, many believe that it is only a matter of time before the executive branch will have sufficient excuse to use the extensive martial law powers that it has been accumulating since 9/11.  When that day arrives, what will our nation look like?  What would actually happen if martial law was declared in America?

Well, the first thing that you need to know is that the U.S. Constitution would be “suspended”.

In other words, you would suddenly have no rights at all.

For the duration of the “emergency”, the military would be in control.  There would be troops in the streets, a curfew would almost certainly be imposed, and armed checkpoints would be set up.

And perhaps most troubling of all, “dissidents” and “subversives” would likely be rounded up and imprisoned.

Perhaps you don’t think that this could ever happen in the United States in 2015.

Well, we do know that this is precisely what the FBI had a plan to do in the 1950s.  The following is an excerpt from a recent RT article…

Documents show the FBI created a “Plan C” during the Cold War, which could have been triggered in the event the US underwent a nuclear attack. It included putting the nation under martial law, rounding up “subversives,” and interning enemy diplomats.

The documents, acquired by transparency journalism organization MuckRock, detail the FBI plan created in 1956, which was shared with several top officials from every governmental department. The FBI also distributed papers regarding the plan to its field offices. The plan would have gone into effect “after a war has begun in which the US is involved or may become involved and prior to an actual attack on the US itself,” according to the documents.

Under Plan C, martial law would be declared and the FBI would enact its ‘Emergency Detention Program,’ which entailed apprehending individuals whose affiliations with subversive organizations “are so pronounced that their continued liberty in the event of a national emergency would present a serious threat to the internal security of the country.” The document shows that as of April 1956, almost 13,000 people “were scheduled for apprehension in an emergency.”

And we do know that the federal government had a list of at least 8 million names of people that were considered to be “threats to national security” back in the 1980s.  This list was known as Main Core, and it is not known whether this list still exists today.

I have a feeling that it does, and that it is probably much larger than it was back then.

We also know that government documents produced during the Obama administration openly discuss rounding up “dissidents” and taking them to internment camps.  Just consider the following example from Infowars…

A leaked 2012 US Army Military Police training manual, entitled “Civil Disturbance Operations,” described how soldiers would be ordered to confiscate firearms and kill American “dissidents.” The manual also revealed that prisoners would be detained in temporary internment camps and “re-educated” to gain a new appreciation of “U.S. policies,” in accordance with U.S. Army FM 3-19.40 Internment/Resettlement Operations.

So who would those “dissidents” be exactly?

In “72 Types Of Americans That Are Considered ‘Potential Terrorists’ In Official Government Documents“, I detailed how official U.S. government documents specifically identify those that believe in “conspiracy theories” as possible threats.  Others that the government is concerned about include those opposed to abortion, globalism, communism, illegal immigration, the United Nations and “the New World Order”.

I wish that none of this was true.  Go check out the article for yourself.

Another very disturbing government document talks about the need for the U.S. Army to prepare to battle political dissidents in “megacities” and to neutralize groups “who can influence the lives of the population while undermining the authority of the state”.  Here is more from Infowars…

The U.S. Army is preparing to fight political dissidents who challenge the power of the state as “megacities” become the battleground of the future, according to a new report in the Army Times.

The article details how the Army’s Capabilities Integration Center (ARCIC) worked with US Army Special Operations Command, the chief of staff’s Strategic Studies Group and the UK’s Ministry of Defence earlier this year to wargame the future of armed combat, which will revolve around the neutralization of groups “who can influence the lives of the population while undermining the authority of the state,” a chillingly vague description which could easily be applied to political dissidents.

The plan foresees an unprecedented realignment of U.S. military strategy focused around putting “boots on the ground” in megacities to deal with “politically dispossessed” populations while relying on “more lethal and more autonomous” methods.

And if we did see martial law declared nationwide, it is likely that all elections would be suspended indefinitely.

That could also potentially include the 2016 presidential election.

Is it possible that Barack Obama could use his emergency powers to stay in the White House beyond his second term?  There are some out there that believe that this could actually happen under the right circumstances.  For example, check out what Dr. Ben Carson said during an appearance on the Alan Colmes radio show…

COLMES: What do you mean though when you say there may not be an election in 2016?

DR. BEN CARSON: There may be so much anarchy going on.

COLMES: Anarchy? So you really think we risk risking an anarchic America to the point where elections might be put on hold, or some kind of emergency is declared with such anarchy that there wouldn’t be a Presidential election in a couple of years?

And the groundwork has certainly been laid for such a scenario.

During his time in the White House, Barack Obama has signed a series of executive orders that give him and his minions an extraordinary amount of power in the event of a major national emergency.

For example, read the following excerpt from an executive order that Obama signed in March 2012…

Sec. 201.  Priorities and Allocations Authorities.  (a)  The authority of the President conferred by section 101 of the Act, 50 U.S.C. App. 2071, to require acceptance and priority performance of contracts or orders (other than contracts of employment) to promote the national defense over performance of any other contracts or orders, and to allocate materials, services, and facilities as deemed necessary or appropriate to promote the national defense, is delegated to the following agency heads:

(2)  the Secretary of Energy with respect to all forms of energy;

(3)  the Secretary of Health and Human Services with respect to health resources;

(5)  the Secretary of Defense with respect to water resources; and

(6)  the Secretary of Commerce with respect to all other materials, services, and facilities, including construction materials.

Basically, during a time of martial law all of the things that you take for granted today would be out the window.

You would have no rights, and the federal government would be able to do just about anything that it wanted to do.

If that sounds really bad to you, then maybe now you are starting to understand why so many people get upset when they see preparations being made for the eventual imposition of martial law in this country.