Hypocrite Socialist Bernie Sanders Is In The 1% 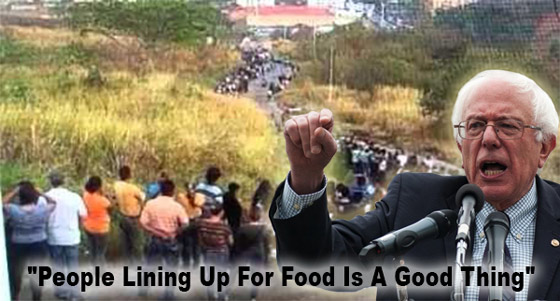 It should come as no surprise that socialists are hypocrites and Senator Bernie Sanders is no different.  He likes to spend his time blaming capitalism and free markets for the 1% when he himself is a true 1%er.

Sanders has never actually created much of anything over the course of his life, other than the hot air he expels as he looks down on those who actually produce wealth in a country with a very limited (if any) free market left.  He may have written some books in which he bemoans the system that has allowed him to get rich, but Sanders is wealthy not just from his books, but off the backs of the taxpayers.  Don’t let him fool you – he became a millionaire in 2016.  He was rich because the government steals money from producers and gives it to him and other criminal hypocrites as a salary for being an authoritarian politician. And this was going on long before he wrote a book.

In the “Land of the Fee and Home of the Slave,” it isn’t uncommon for imbeciles to follow along what Sanders and other socialists proclaim.  They will jump and cheer if the government ever confiscates wealth from those who have worked hard, all because they have never actually created enough wealth to provide anything to society – other than the constant complaining about “the system” that keeps them down (the very system they want to be expanded and larger.)

Totalitarian millionaire, Bernie Sanders, who has infamously made income inequality a hallmark of his presidential campaign, earned with his wife about $566,000 last year and $1.15 million in 2017, putting them in the nation’s highest income brackets, according to tax returns released by the presidential candidate Monday. Sanders and his wife are officially in the top 1% of income earners in the United States according to The Washington Post.

Ironically, the money made from his book, which is a battle cry against freedom and free markets was only able to be successful in the teeny arena of capitalism the United States has left. Sanders is essentially using the system he rails against daily to get wealthy.  But it’s not like he wasn’t rich before – that was just money stolen from others who mostly made less than he did to be his slaves.

Sanders’s annual Senate salary is $174,000. Much of his income came from books he has written about his democratic socialist platform, which includes a call for higher taxes on the wealthiest Americans – such as himself.  Perhaps he should lead by example and give up 90% of his income to the government.

This should really not come as a surprise. After all, if socialists were logically and morally consistent, they wouldn’t be socialists.