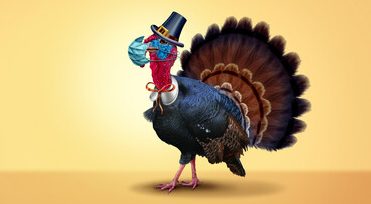 This article was originally published by John W. Whitehead at the Rutherford Institute.

“War is over. If you want it.”—John Lennon

If ever there were a year filled with an abundance of bad news and a shortage of good news, 2020 would take the prize. Between the toxic political theater, pandemic scares, nationwide lockdowns that smack of martial law, a rollercoaster economy, and the ever-present menace of the police state, it’s been a hard, heart-wrenching, stomach-churning kind of year overrun with too much hate and too little tolerance.

It’s been a year in which tyranny took a few more steps forward, freedom got knocked down a few more notches, and politics and profit margins took precedence over decency, compassion, and human kindness.

Now we find ourselves at this present moment, overwhelmed by all that is wrong in the world and missing the fellowship of family and friends kept apart by COVID-19 restrictions and concerns.

No wonder this Thanksgiving finds so many struggling to reflect and give thanks for what is good. After all, how do you give thanks for freedoms that are constantly being eroded? How do you express gratitude for one’s safety when the perils posed by the American police state grow more treacherous by the day? How do you come together as a nation in thanksgiving when the powers-that-be continue to polarize and divide us into warring factions?

Here’s what I’ve learned from living in a small community (population 1500) for the past year: you don’t have to agree on politics, or subscribe to the same religious beliefs, or have the same demographic makeup in order to live peaceably with one another.

These small-town people don’t have a preponderance of fancy cars or advanced degrees or six-figure salaries or committees aimed at discussing problems to death, and yet they have mastered the art of getting along. They make no secret about their views on politics and religion and anything else on their minds, and yet they remain friendly—neighborly—respectful of those with opposing views, even when they wholeheartedly disagree.

Yes, America, there is life beyond politics and it can be wonderful if you just give it a chance.

Here’s what I suggest: this Thanksgiving, do yourselves a favor and turn off the talking heads, tune out the politicians, and take a deep breath. Then try this exercise in gratitude: find something to be thankful for about the things and people in your community for which you might have the least tolerance or appreciation. Instead of just rattling off a list of things you’re thankful for that sound good, dig a little deeper and acknowledge the good in those you may have underappreciated or feared.

When it comes time to giving thanks for your good fortune, put your gratitude into action: pay your blessings forward with deeds that spread a little kindness, lighten someone’s burden, and brighten some dark corner.

Engage in acts of kindness. Smile more. Fight less. Build bridges. Refuse to let toxic politics define your relationships. Focus on the things that unite instead of that which divides.

Even with COVID-19 restrictions in place throughout the country, there is still so much good that can be done to help those in need.

Be a hero, whether or not anyone ever notices.

Acts of benevolence, no matter how inconsequential they might seem, can spark a movement.

“Each of us has an inner hero we can draw upon in an emergency,” concludes psychologist Philip Zimbardo. “If you think there is even a possibility that someone needs help, act on it. You may save a life. You are the modern version of the Good Samaritan that makes the world a better place for all of us.”

All it takes is one person breaking away from the fold to change the dynamics of a situation. “Once anyone helps, then in seconds others will join in because a new social norm emerges,” notes Zimbardo.

This is what Zimbardo refers to as “the power of one.”

“If you find yourself in an ambiguous situation, resist the urge to look to others and go with your gut instinct,” advises Melissa Burkley in Psychology Today. “If you think there is even a possibility that someone is in need, act on it. At worst, you will embarrass yourself for a few minutes, but at best, you will save a life.”

In other words, don’t turn away from suffering. Even smiling at a stranger in these fearful times can be a revolutionary act.

All it takes is one person to start a chain reaction.

For instance, a few years ago in Florida, a family of six—four adults and two young boys—were swept out to sea by a powerful rip current in Panama City Beach. There was no lifeguard on duty. The police were standing by, waiting for a rescue boat. And the few people who had tried to help ended up stranded, as well.

Those on shore grouped together and formed a human chain. What started with five volunteers grew to 15, then 80 people, some of whom couldn’t swim.

One by one, they linked hands and stretched as far as their chain would go. The strongest of the volunteers swam out beyond the chain and began passing the stranded victims of the rip current down the chain.

One by one, they rescued those in trouble and pulled each other in.

There’s a moral here for what needs to happen in this country if we only can band together and prevail against the riptides that threaten to overwhelm us.

As I make clear in my book Battlefield America: The War on the American People, there may not be much we can do to avoid the dismal reality of the police state in the long term—not so long as the powers-that-be continue to call the shots and allow profit margins to take precedence over the needs of people—but in the short term, there are things we can all do right now to make this world (or at least our small corners of it) a little bit kinder, a lot less hostile and more just.

It’s never too late to start making things right in the world.