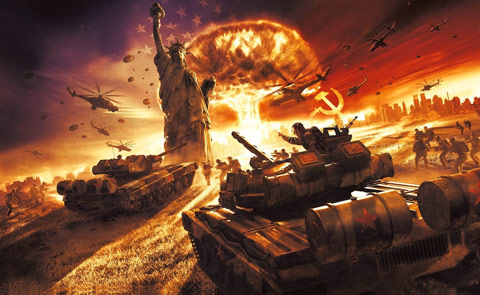 We’re going to take a look at a potential attack scenario against the United States.  We’re going to analyze it strictly from a military-economic perspective and weigh possible courses of action by a foreign power or powers in an attack.

Firstly, it is my belief that there will be foreign powers involved, yet one will initiate the entire thing: North Korea.  Let’s start up the scenario.

1. North Korea launches an EMP attack, via ICBM or satellite.

The EMP attack will effectively shut down the entire U.S. economy and infrastructure.  Many non-hardened elements of the United States armed forces will suffer loss, and the response time for a conventional incursion will be drastically reduced.

2. Command and Control Areas of the Government, the Military, and the Economy will be nuked.

The most probable cities that will be taken out will be as follows:

(West Coast) – Seattle, WA, Portland, OR, San Francisco, CA, San Diego, CA.  Strikes will also be conducted on Ft. Lewis, WA because of the Ranger and Special Forces unit & group there.  The weapons will be airburst of fairly low-yield in the attempt to not irradiate with the prevailing westerly winds.

This may seem to be “light,” in terms of targets, and there is a reason for this: they want to take the land and resources, not irradiate them into uselessness.

3. The invasion begins with Special Forces, followed by airborne units and then conventional forces.

The Special Forces units of the invading nations will have already been inserted weeks earlier by drops, by sea, or allowed to reach their destinations in a clandestine fashion disguised as civilians and traveling from different locations, separately.  Those special units that will be utilized on the initial invasion (for strike missions against targets of varying degrees of importance, such as generators and hydroelectric plants) will be held at the line of departure on a leash until the attack begins.

When the EMP renders a “lights out scenario” it will probably occur at night, and immediately afterward will come drops of airborne troops and Special Forces assets.  These will be shock troops to secure areas assigned until the main bodies come ashore.

The Chinese will take the entire West Coast, the Russians will take Alaska and drive southward, securing the coastline for their naval assets and taking control of the pipeline (which neither side will bomb or irradiate).  The Russians will either halt at the southeastern corner of Alaska, or they will drive downward through Canada until they can perch themselves just across the border on the state lines of Washington, Idaho, and Montana.  The Russians will also mount an invasion on the East Coast, bypassing “hot spots” of irradiated cities previously mentioned in the initial nuclear strikes.

Later the two nations will coordinate for their drives into the interior.  Meanwhile the armies of Venezuela, Bolivia, Nicaragua, and Cuba will make their way into the unguarded underbelly of the United States into Texas and the Border States via Mexico.  Their objective will be to seize the cities of the Gulf of Mexico.  Airborne and Special Forces units of their respective countries, along with the Chinese and Russians, will aid them: all of these will be inserted into the interior.

Their targets to seize and occupy will include Indianapolis, IN (the central railway “hub” of the entire U.S.), and New Orleans, LA (the critical port city where the Mississippi river empties into the Gulf of Mexico; critical for shipping and transport).

5. The Russians will amass submarine assets in the Atlantic with secondary nuclear targets if needed.

At this point, it is worth mentioning that all U.S. naval assets abroad, such as carrier groups, will be nuked.  The attackers have the advantage of no nuclear reprisals being the policy of the Obama administration when the EMP is initially delivered.  There are several reasons for the limited nature of the nuclear strikes.

Firstly, the West Coast would be subdued without damaging the Imperial Valley, the breadbasket of the U.S. that produces almost 1/5 of the fresh, domestic produce in America.  In addition, these nations do not want to irradiate the Midwest due to the corn and wheat, as well as the cattle industry and other segments of domestic food production.

With the EMP, there will be a 24 – 48 hour window of almost stultifying confusion that will lead to semi-paralysis.  There are many cities (especially the ports) that will be kept intact due to the desire of these nations to take our resources and ship them by rail to the ports and then back to their home countries, minus a percentage to upkeep the foreign troops.  This follows Sun Tzu’s principle of resupplying your troops with the enemy’s supplies and provisions.

In the next article, we will cover what areas of the U.S. hold what particular interests for invaders, and outline what the U.S. responses and courses of action will be, from both a military (active duty and national guard) and civilian perspective.

[Click here to be alerted when this analysis is available]