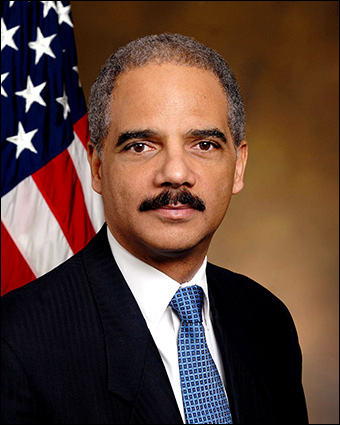 This article and research was originally published by Kit Daniels at Infowars.com

Comment from Alex Jones: This is a classic example of criminal racketeering. Holder is shutting down businesses just like the Nazis targeted the assets and later the companies of Jews in the 1930′s. The DoJ has been caught shipping guns to drug dealers, terrorists and gang members in Mexico under Fast and Furious, yet Holder is targeting legitimate, lawful gun shops. This is completely outside of the law and resembles the behavior of a dictatorship. Impeachment proceedings must begin immediately.

For the past several months, the U.S. Department of Justice has been pressuring banks to refuse service to businesses the DOJ is targeting politically, such as gun stores, in a program entitled Operation Choke Point.

Under the program, the DOJ, headed by Attorney General Eric Holder, is attempting to shut down various legal businesses, including firearm dealers, dating services, purveyors of drug paraphernalia and pornography distributors, by coercing financial institutions to close the bank and merchant accounts associated with these businesses.

The businesses targeted follow a 2011 Federal Deposit Insurance Corporation bulletin which lists all of the above legal activities and others as “merchant categories that have been associated with high-risk activity” involving “disreputable merchants.”

In other words, the FDIC, and now the DOJ, are trying to demonize gun shops by causing banks to view legal firearm dealers as no different than pushers of “ponzi schemes” and “get rich products,” two “high-risk” activities that are also listed in the bulletin.

In 2012, Bank of America told a gun company, McMillan Group International, that because the company was expanding into firearms manufacturing, the bank no longer wanted McMillan’s business.

“We have to assess the risk of doing business with a firearms-related industry,” the bank’s representative told operations director Kelly McMillan.

Last month, BitPay, a U.S.-based bitcoin processor, likewise refused to do business with gun dealer Michael Cargill of Central Texas Gunworks due to a similar policy.

And also in March, a Florida couple who own a gun store received a letter from BankUnited informing them that the bank was closing their business account, which they opened seven years prior, and gave them three days to transfer their money elsewhere.

“I was very angry,” Elizabeth Liberti told the Miami New Times. “They were very inconsiderate. We had all our credit cards going through that bank.”

“All of a sudden, we had to run and find another bank to keep our business going. We shut down for two weeks, and they wouldn’t even tell us why.”

BankUnited finally gave them a reason some time later.

“This letter in no way reflects any derogatory reasons for such action on your behalf, but rather one of industry,” wrote branch manager Ricardo Garcia. “Unfortunately your company’s line of business is not commensurate with the industries we work with.”

And it isn’t just gun stores that the Justice Dept. is targeting.

“I got a letter and it was like please cancel all transactions, please fix your automatic pay account and make sure everything’s taken care of by May 11,” actress Teagan Presley told Xbiz. “I called them and they told me that because I am, I guess, public and am recognizable in the adult business, they’re closing my account.”

“Even though I don’t use my account, it’s my personal account that I’ve had since I was 18, when it was Washington Mutual before Chase bought them out.”

And when Presley went to Bank of America to open a new account, the bank also turned her away.

An adult industry attorney, Michael Fattorosi, told Xbiz that banks in the past have “notoriously closed adult accounts or people in the industry’s accounts, but nothing like this.”

That’s because this discrimination is coming straight from the Justice Dept.

Jason Oxman, the CEO of the Electronic Transactions Association, recently revealed the massive scope of Operation Choke Point, which he indicated was also targeting ammunition sales.

The DOJ is ensuring the banks’ cooperation by threatening them “with subpoenas, civil investigative demands, and other burdensome and costly legal demands,” he wrote on The Hill. “And it’s working – payments companies across the country are cutting off service to categories of merchants that – although providing a legal service – are creating the potential for significant financial and reputational harm as law enforcement publicizes its activities.”

The Justice Dept.’s ultimate goal is to shut down these businesses completely.

Visit Infowars.com for breaking news, commentary and reports you won’t find in the mainstream. You can follow Infowars daily via the Alex Jones Youtube Channel and Facebook page.