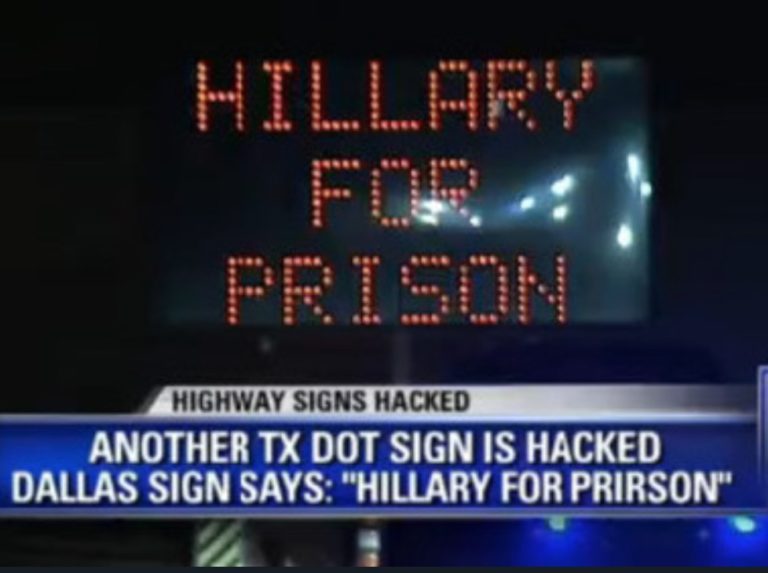 This article was written by Michael Krieger and originally published at his Liberty Blitzkrieg.

Editor’s Comment: Besides the fact that this is a hilarious episode of culture jamming, it reveals the hacking vulnerabilities of… well just about everything in society. These appear to be angry Bernie supporters, and it goes to show how angry and close to revolt people on all sides of the issue have become.

A group calling itself New World Hackers has been taking over billboards along Interstate 30 in Dallas. Like myself, the group seems to dislike both the Democratic and Republican candidates for President, Donald Trump and Hillary Clinton.

Electronic road signs in Texas have been targeted by hackers with messages against presidential candidates Donald Trump and Hillary Clinton.

Signs on Interstate 30 were changed over recent weeks to read “Donald Trump is a shape shifting lizard,” “Hillary for prison,” and “Free Barrett Brown.” A group of hackers called New World Hackers, who have previously targeted the website of Trump, claimed responsibility.

“As we stated earlier in the past… Trump is a little bitch,” a member of the group tells Newsweek. “Hillary is worse. Barrett Brown is a legend. Hillary should be in prison for her actions most definitely.” What Newsweek failed to mention is the hackers seem to have a favorite candidate — Bernie Sanders. Here’s what another sign looked like: Finally, I’d be remiss not to mention another sign displaying support for political prisoner, Texan and one of the most gifted writers in American, Barrett Brown. If you aren’t familiar with Barrett’s story, I’ve covered it on multiple occasions. See: