Hillary Clinton Calls For RESISTANCE In New Video: “We Need To Stay Engaged… I’ll Be With You Every Step Of The Way” 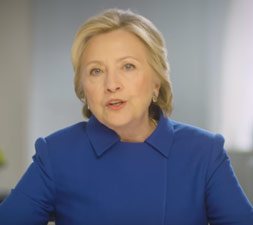 Last month we noted that Hillary Clinton is looking to start her own “fabulous” TV show in an effort to remain relevant following a disastrous Presidential election loss in 2016. The show, according to an insider, would be “completely controlled” and will likely focus on undermining the efforts of President Donald Trump, while whipping her supporters into a frenzy.

Now, in a three minute video address to fellow Democrats, the former Secretary of State says she is going to keep the fight going with the help of former President Barrack Obama and his wife Michelle, who incidentally, recently started their own organization aimed at marginalizing the new Trump administration.

The challenges we face as a party and a country are real. So, now more than ever, we need to stay engaged in the field and online, reaching out to new voters, young people and everyone who wants a better, stronger and fairer America.

We as Democrats must move forward with courage, confidence and activism, and stay focused on the elections we must win this year and next.

Let resistance plus persistence equal progress for our party and our country.

…Keep fighting and keep the faith… and I’ll be right there with you every step of the way.

As we reported earlier this week, tens of millions of dollars are actively being funneled into so called non-profit organizations who are involved in a variety of activities that include direct attacks on the alternative media which tanked Hillary’s Presidential run, infiltration of the Trump White House, and instigation of purported “grass roots” movements through the use of paid agitators like the anonymous provocateurs we recently saw at protests in Berkeley, California.

Make no mistake, Hillary Clinton is running for President in 2020 and the video you just watched is the opening salvo in a conflict that is designed to divide and conquer the American people.