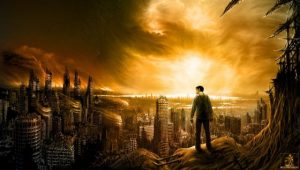 We now live in a world, where bizarro headlines such as the ones below, have become a daily if not hourly occurrence:

Now, in case someone is still confused, none of these institutions, and not a single of the erudite officials running them, give a rat’s ass about the climate, about climate change risks, or about the fate of future generations of Americans (and certainly not about the rising water level sweeping away their massive waterfront mansions): if they did, total US debt and underfunded liabilities wouldn’t be just shy of $160 trillion.

So what is going on, and why is it that virtually every topic these days has to do with climate change, “net zero”, green energy, and ESG?

The reason – as one would correctly suspect – is money. Some $150 trillion of it.

Earlier today, Bank of America published one of its massive “Thematic Research” tomes, this time covering the “Transwarming” World, and serves as a massive primer to today’s Net Zero reality. The report (which is available to all ZH pro subs) is actually a must-read, interesting, chock-full of data and charts such as these…

… none of which happen to mention China’s role in the “global climate change” crisis of course (after all, can’t offend Beijing and lose the biggest revenue stream now can we) and comes at a very precarious time for the green cause, just when soaring energy prices around the globe as a result of the escalating global energy crisis, threatens to crush any grassroots support to fight “global warming.” As report author Haim Israel writes:

This is the decade of climate action and COP26 will be the tipping point of the race to reach net zero emissions – the balance of reducing and removing carbon emissions from the atmosphere. To achieve it, a transition to clean technologies in all sectors at an unprecedented pace would be required, with the steering of governments and willingness of society. This is the last decade to act. Absolute water scarcity is likely for 1.8bn people, 100mn face poverty, and 800mn are at risk from rising sea levels by 2025. Climate migration could reach 143mn from emerging markets, driven by extreme weather.

None of that is new, of course – and while it is handy to have a centralized compendium of the data, a 5-minute google search can provide all the answers that are “accepted” dogma by the green lobby.

But while we don’t care about the charts, that cheat sheets, or the propaganda, what we were interested in was the bottom line – how much would this green utopia cost, because if the “net zero”, “ESG”, “green” narrative is pushed so hard 24/7, you know it will cost a lot.

Turns out it does. A lot, lot.

Responding rhetorically to the key question, “how much will it cost?”, BofA cuts to the case and writes $150 trillion over 30 years – some $5 trillion in annual investments – amounting to twice the current global GDP!

At this point, the report gets good because since it has to be taken seriously, it has to also be at least superficially objective. And here, the details behind the numbers, do we finally learn why the net-zero lobby is so intent on pushing this green utopia – simple answer: because it provides an endless stream of taxpayer and debt-funded “investments” which in turn need a just as constant degree of debt monetization by central banks.

Consider this: the covid pandemic has so far led to roughly $30 trillion in fiscal and monetary stimulus across the developed world. And yet, not even two years later, the effect of this $30 trillion is wearing off, yet despite the Biden’s admin to keep the Covid Crisis at bay, threatening to lock down society at a moment’s notice with the help of the complicit press, the population has made it clear that it will no longer comply with what is clear tyranny of the minority.

And so, the establishment needs a new perpetual source (and use) of funding, a crisis of sorts, but one wrapped in a virtuous, noble facade. This is where the crusade against climate change comes in.

Much digital ink has been spilled on the philosophy and debate behind the green movement, and we won’t bore you with the details, but we will instead focus on the very clear, and very tangible financial consequences of a world where the establishment agrees, whether with democratic support or not, to allocate $5 trillion in new capital toward some nebulous cause of “fighting global warming.” Here are the highlights from Bank of America:

Drilling down on the absolutely staggering costs, at an estimated $150 trillion over 30 years, boosting funding sources to $5tn a year is equivalent to the entire US tax base, or 3x the COVID-19 stimulus this decade. Here are the details:

The energy transition to a net zero greenhouse gas (GHG) economy by 2050 will be a very expensive exercise, estimated by the IEA at $150tn of total investment, over a period of 30 year. At $5tn p.a, the IEA see it costing as much as the entire US tax base every year for 30 years.

Not high enough for you? Hang on then because…

BNEF has a higher estimate that the total investment needed for energy supply and infrastructure could be as high as $173tn through 2050, or up to $5.8tn annually, which is nearly three times the amount invested on an annual basis today.

Next follows the obligatory pitch from BofA which is reminiscent of a Stalinist kolhoz pep talk from the 1950s, to wit:

… But it can be done, with technology, economy, markets and ESG joining forces. Exponential cost reductions in wind, solar and batteries technologies have made renewables the cheapest form of energy in areas producing >90% of global electricity. Market appetite is chipping in too. Labelled bonds and loans jumped to > $3tn this year, with $3 in every $10 of flows into global equities going into ESG, which will support climate-friendly investments, as well as funding new ones needed to further decarbonize our planet like green mining, green hydrogen or carbon capture.

We leave the best for last because at the end of the day, this was always about more debt, and more monetization, a process which by now even the shoeshine boy knows makes the rich richer and the poor poorer. Only this time the world’s wealthiest plan on robbing what little is left of the middle class under the guise of a noble crusade to defeat global warming… a crusade which will require over $500 billion in annual debt monetization by central banks each and every year, leading to hyperinflation in either risk assets or the broader economy, or both.

So if it sounds like “the crusade against climate change” is one giant con game meant to enrich a handful of kleptocrats here and now, while the nebulous benefits – and the all too certain debt and hyperinflation – of this revolutionary overhaul of the global economy are inherited by future generations, it’s because that’s precisely what it is.

Here is BofA’s startling admission of the above, as excerpted from the report’s Q&A on the Climate Change Conference (COP 26):

Q: What is the economic impact of net zero?

A: The inflation impact of elevated net zero funding will not be insignificant but the impact looks manageable at 1% to 3% per annum depending on central bank monetization rates, particularly if government spending is targeted and contributes to accelerate the rate of global GDP growth. The IEA also has a productive outlook for their net zero scenario, where the change in the annual growth rate of GDP accelerates by somewhere between 0.3% and 0.5% on a sustained basis over the next 10 years as a result of a shift to a green economy.

So much more QE for the next 30 years, check. What about inflation? Oh, there will be plenty of that too. As BofA admits, “green bond purchases  could result in a 1% to 3% inflation p.a. shock”

To answer this question, we look at three separate cases. In our first case, the Fed, ECB, and other central banks would subsidize all of the required infrastructure spending to decarbonize (translation: print the money). In a second scenario, we assume that they would absorb only half of the new bond issuance. And in a third case, we assume central banks take up only a fifth of all decarbonization spending onto their balance sheet. What is our key finding? If central banks only have to foot 20% of the bill or less, the impact of decarbonization looks fairly manageable with respect to inflation (Exhibit 108).

And just so readers know what to BofA looks “manageable” here it is: this is inflation on top of whatever inflation is already in the economy. Of course, if central banks have to “foot” 50%, 80%, or more, well… it gets much worse.

And this is where we get to the punchline: as BofA admits, it’s all about greenlighting the biggest QE episode in history!

We just see a peak of <1% additional inflation a year over a three decade horizon. Under more aggressive scenarios where central banks opt to absorb either half or the full decarbonization bills through quantitative easing, the risks of an inflation shock grow. Still, we think our third case is the most likely scenario, as it would be politically difficult to justify a much more expansive monetary impulse. True, while central bankers have expressed a desire to help green the economy, their corporate bond purchases have historically been restricted to crisis time policies through quantitative easing and remain well below purchases of sovereign debt. As such, any purchases of corporate green bonds would likely be limited both by the size of future purchase programs and their proportion relative to the overall corporate bond market, with slightly higher allocations under more progressive purchase policies that highlight environmental concerns

And there you have it: just as covid was one giant smokescreen to “allow” central banks and Treasuries to merge and lead us to Helicopter Money and MMT, creating some $30 trillion in liquidity in the process, the “Net Zero” myth is what will perpetuate this endless printing for the next 30 years, a period during which the only benefits will be bestowed upon those who benefit from QE and money printing. That would be the richest. As for everyone else, well your great-grandchildren or their grandchildren may (or may not) live in a cleaner world. We really don’t know, but if we don’t start printing money now it will be too late.

If that sounds scarier and more manipulative than any religion in human history, it’s because it is.

The full 114-page report, which we recommend to anyone who wants to know what is coming, is available to pro subs in the usual place.