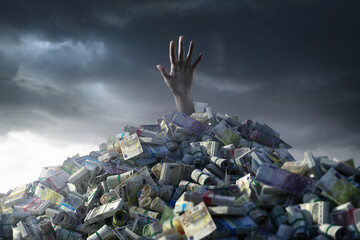 Executives at leading hedge-fund firm Elliott Management Corporation are warning that the world is heading toward the worst financial crisis since World War II. The looming hyperinflation could lead the world into a global societal collapse scenario.

In a letter sent to investors, and reportedly seen by the Financial Times, the Florida-headquartered firm told clients that it believes the global economy is in an “extremely challenging” situation that could lead to hyperinflation.

The firm, which is led by billionaire Paul Singer and Jonathan Pollock, told its clients that “investors should not assume they have ‘seen everything.’” They have been through the peaks and troughs of the 1987 crash, the dot-com boom and bust, the 2008 global financial crisis, and previous bear and bull markets. But the looming hyperinflation will cause a global problem the likes of which, the world has never seen.

The letter said the world is “on the path to hyperinflation,” which could lead to “global societal collapse and civil or international strife,” according to a report by Market Watch.

[Elliott Management] blamed central-bank policy makers for the current global economic situation, saying they had been “dishonest” about the reasons for high inflation. They said lawmakers had shirked responsibility by blaming it on the supply-chain disruption caused by the pandemic instead of citing the loose monetary policy imposed two years ago during the COVID-19 peak. Market Watch

The Financial Times reported that the hedge fund has posted a 6.4% return so far this year and has only lost money during two years in its 45-year history.

Back in March, the ruling class made sure they got a massive raise while the slave continued to suffer under the weight of hyperinflation. More pain will be coming and it won’t end after 2022 does, says Elliott.

Congress Got A 21% Raise While Americans Are Suffering Hyperinflation

Elliott did not respond to Market Watch’s request for comment.

This would be the economic and societal collapse the ruling class’s need to get their central bank digital currency off the ground and accepted by the masses. The endgame will be here anytime now.