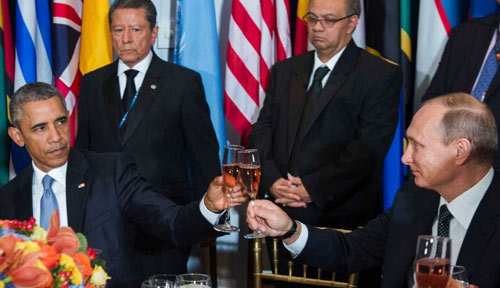 President Obama appointed James Clapper as his Director of National Intelligence in 2010.  As of January 2016, the Obama administration paid Iran over half a billion dollars, unfroze Iranian assets, paid the Iranians interest on their previously-frozen accounts, and through the remainder of the year will give the Iranians almost $12 billion in aid.  Such activities bear close scrutiny, and we’ll begin with a quote from Clapper:

“Iran continues to be the foremost state sponsor of terror and exert its influence in regional crises in the Mid-East through the Islamic Revolutionary Guard Corps’ Quds Force, its terrorist partner Lebanese Hezbollah, and proxy groups.  Iran and Hezbollah remain a continuing terrorist threat to U.S. interests and partners worldwide.  Iran’s supreme leader continues to view the U.S. as a major threat and we assess his views will not change despite the implementation of the deal, the exchange of detainees, and the release of the 10 sailors,” Clapper said.

Basically Obama has ramrodded a deal through Congress (just as complicit as Obama for enabling his actions) to give funding to Iran, our avowed enemy.  Now treason is a difficult charge to make stick against a sitting U.S. president; however, the one committing it now actually enabled it to stick himself.  Here is the part he likes:

National Defense Authorization Act for Fiscal Year 2012, Pub.L. 112–81. This NDAA contains several controversial sections, mainly §§ 1021-1022, which affirm provisions authorizing the indefinite military detention of civilians, including U.S. citizens, without habeas corpus or due process, contained in the Authorization for Use of Military Force (AUMF), Pub.L. 107–40.

By signing the NDAA into law, Obama’s wording in a nutshell made the entire world a battlefield in the “War on Terror.”  As such, Obama the Commander-in-Chief is outside of the UCMJ.  A Commander-in-Chief is (regarding a Chain of Command) sort of akin to “Captain Crunch”, but with eye-teeth….no accountability to anyone…. yet as captain of the ship, able to send the legions marching for at least 30 days without congressional approval.  The supreme military commander without any true military oversight to guard against his actions.

Obama only appears to be a bungling clown.  His true mentor was not Sun Tzu, but Saul Alinsky, and the tactics he has been using have been sound…soundly resounding a death knell for the U.S. military and bringing the country to its knees.  Every single action he has taken has been calculated and with true, deliberate purpose.  His plan is Cloward-Piven, and his playbook is “Rules for Radicals.”

What more is needed?  The NDAA permits any citizen to be grabbed and hauled off by the Cheka/NKVD/DHS for “indefinite detention” just for suspicion of complicity with terrorist activity.  Look at this guy sitting on the throne that was once the leather chair of the Oval Office!  No accountability whatsoever.  The payments were made with no strings, just flat out given to Iran, the banker of Hezbollah and also funding its own terrorist activities, such as atrocities carried out by Iran’s Republican Guard.  By aiding and abetting the enemies of the U.S., the President has deliberately and with knowledge aforethought committed treason and can be impeached, plain and simple.  They wanted the entire world to be labeled a “battlefield” of the “War on Terror?” Well, then, the rules for treason and aiding and abetting an enemy…especially one committing terrorist acts and enabling them…apply to this sitting Commander-in-Chief.

Oh, but the State Department “conveniently” instituted Obama’s open arms policy and removed the Republican Guard from the watch-lists of suspected terrorist organizations.  This was done in 2014 to precede the outflow of the cash to Iran in 2015.

I’m not pulling any punches here in this article. President Obama made comments to Medvedev prior to the 2012 elections regarding the deployment of ICBM’s and also missile defense systems in Eastern Europe.  His “hot mic” picked up the conversation…in essence, “Tell Vladimir that I’ll have more leeway [with the missiles] after the election.”

There you have an instance: a sitting U.S. president talking about reducing the size of our nuclear arsenal, the defenses of the United States, unilaterally and without Congressional approval.  Now you have another instance: Obama has enriched Iran financially, enabling it to arm itself militarily.

All of this enabled by the uncomprehending public, the masses, and their tax dollars.  They have the right to rise up and shake this petty dictatorship from their throat as a lion would swat a hyena away; yet, the public complacency allows the hyena to feed….and off of them.

February news reports revealed that the Iranians are spending billions of dollars acquired under the release of funds by Obama under the nuclear deal.  Guess what they’re buying?  Su30SM fourth generation fighter aircraft, the S-300 air defense system, and the T-90 tank, Russia’s newest design.  John Kerry specifically stated that the UN veto the United States holds will not be necessary.  He was asked pointedly about it by a Congressional Oversight committee that plainly declared the sale of arms by Russia to Iran was in violation of the UN Security Council mandates.

And the Obama administration?  They acknowledged the illegality of the sale by Russia to Iran under Security Council Resolution 2231.

With malice aforethought, and completely aware of what they are doing…. they are taking the orders directly from Obama.  And he’s Teflon…nothing sticks to him.  But it is clear: he is aiding and abetting the enemies of the United States.  He has committed treason on numerous occasions.  It has been long past the time for the American people to stand their ground and have him removed from office.  The grounds: treason, against the people of the United States of America.