“I don’t feel safe with a gun in my house”: Gun Control PSA Tells Kids to Steal Parents’ Guns, Turn Them in at School 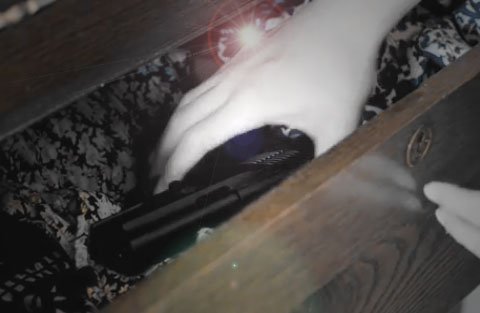 Show and tell on your parents.

Here’s the latest plan to end gun violence – by encouraging concerned children to steal their parents’ firearms from them and turn them in at schools, or perhaps police precincts.

Unbelievable, but it is happening:

The PSA video above shows a young teen dramatically rifling through his parents’ drawer, only to take out a handgun and put it in his backpack, all while his mother is downstairs reading.

The next day, he brings the gun to school, sits through class, and places it on a startled teacher’s desk before asking, “Can you take this away? I don’t feel safe with a gun in my house.”

This is independent director Rejina Sincic’s idea of how to end gun violence and keep children safe. The message at the end reads, “Our children deserve a safe world. Stop gun violence now.”

Hardly the connection most people would make with a student bringing a weapon to school… not to mention a terrible and dangerous example for the children.

BearingArms.com writes about the real world consequences of bringing a firearm into our modern day gun-free zones, err, schools, not to mention the very real possibility of creating hysteria with potentially deadly consequences:

In the real world, such an act would result in the boy facing numerous felony charges (exact charges depend on state laws) possibly including weapons theft, unlawful possessionof a weapon by a minor, illegal concealed carry of a weapon, carrying a weapon onto school property, assault, and brandishing.

He would face the possibility of felony criminal record and mandatory expulsion from his school… and this is the kind of behavior that deranged gun control supporter Sincic is hoping that children will emulate.

Director Rejina Sincic took to Twitter, taunting that many people were too afraid of her PSA, and too cowardly to spread it around.

Lot of people are afraid to share my PSA! If you are not a coward please share https://t.co/q2sisRKCN1 … … #gunviolence

Perhaps they just see the folly in a crazed push for gun control in the wake of Sandy Hook, much of it funded by billionaires, that has repeatedly defied common sense, logic, constitutional rights and instead wished, as with fairy wings, for a world safe enough because it is free from all legally owned guns.

The PSA has overwhelmingly negative feedback on YouTube, while the Twitter world fired back at this failed attempt to make the world a better place:

@QueenSincic So you’re encouraging teens to steal weapons and then turn them in at school, & become double felons. Are you F****** Stupid

@QueenSincic Are you insane with that video? You better hope no one is injured because of it. You liberals are absolutely clueless!

@QueenSincic You're encouraging a minimum of four felonies, and the significant risk of a negligent discharge hurting or killing someone.

@QueenSincic Thank you for making THE WORST gun control PSA in the history of the world. GUNS SAVE LIVES EVERY DAY.

Unfortunately, this director is only encouraged by the attention the video is drawing, even if that attention is squarely negative.

I’m entertained by tweets that I’m getting about my PSA. Here it is of you haven’t seen it https://t.co/q2sisRKCN1 … … #gunviolence