Greece Is Nothing Compared to These Guys…

European Union members are in the middle of numerous sovereign debt crises. Greece, as we’ve noted before, is just the canary in the coal mine for the wealth destruction that is to come.

What we have heard in the news from mainstream pundits and economic experts is that “Greece” sovereign debt is in trouble, and it’s the country of Greece that needs to be saved. The reality is, however, that it’s not the country that is being bailed out, but rather, the banks that invested in it. If it was just Greece we can be assured that they would have been allowed to default long ago. All of the machinations, money printing, and emergency bailouts that European leaders have been working towards are not for the benefit of the Greek people, but for the benefit of the private banking institutions that face insolvency if they don’t get paid. It didn’t work a year ago, and this next round of bailouts for Greece will be yet another failure.

What’s worse is that, just as we and others had forecast in 2009 and 2010, debt problems in the rest of Europe are now coming to the forefront, and the exposure that European banks (and thus, American banks) have to these sovereign debts threatens to literally wipe out several of the largest banks in the world unless the EU et. al. can figure some way out of it.

If you thought Greece was bad, take a look at the exposure that European banks have to Italy’s sovereign debt – we’re talking massive amounts of money: 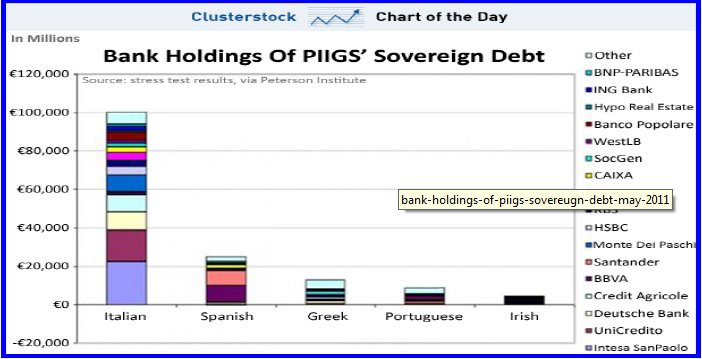 From Bert Dohmen, publisher of The Wellington Letter:

Here we can see that the European banks have almost ten times more exposure to Italian sovereign debt than to Greek debt. Yet until June 24, when the Italian bank stocks started tumbling, we heard nothing about that.

Billionaire George Soros said this at a recent conference in Vienna:

“Let’s face it: we are on the verge of an economic collapse which starts, let’s say, in Greece but could easily spread. The financial system remains extremely vulnerable… We are on the edge of collapse and that is the time to recognize the need for change.”

We are on record of stating that total troubled debt in the Eurozone banking system is perhaps around $800 billion. No one talks about this hidden monster. However, an article by Wolfgang Munchau of the Financial Times puts it at 800 billion Euros, or about 30% higher than our estimate. That’s over $1 trillion.

He also points out the members of the EU have guaranteed the debt of all the members of the eurozone. That’s not generally known. As Germany is the only member that is financially viable, Germany in effect is liable for all of this debt. Perhaps Germany’s credit rating should be downgraded?

“So far European officials have failed to stabilize a country as small as Greece,” Greenhaus said. “So we have little reason to have faith they’ll fix a country as big as Italy.”

We saw what happened in Greece over the last twelve months. How do you think the people of Italy and Spain will react? What about the German people, whose government has ‘guaranteed’ all of this debt?

We can expect more protests, riots, violence and financial Armageddon in Europe in months ahead.

For now, the US stock market suggests America is immune to what’s happening in Europe. But if you pay close attention you’ll note that the stock market fluctuates daily and in many cases those fluctuations have been dependent on what the Europeans are announcing. Similar to the US, the events in Europe are literally changing from hour to hour – one day the crisis is solved, the next day it’s a catastrophe. One day soon the reality of what’s happening will hit home and no one will believe the nonsense anymore.

There remains a very high likelihood that the catalyst for a stock market collapse and the second wave of this depression will be European sovereign debt (much like what happened ahead of the Great Depression of the 1930’s when European countries defaulted on their debt).